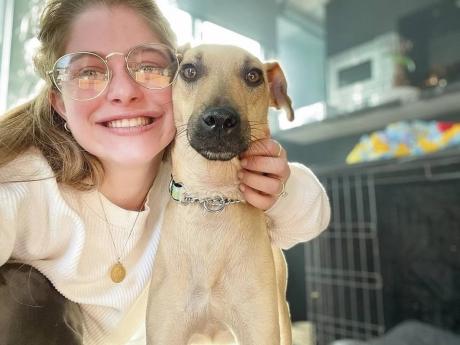 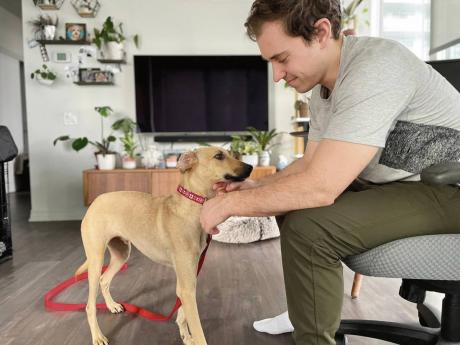 One of 144 dogs who were flown on a chartered flight to Canada last month, Joseph was recently adopted by the 25-year-old elementary schoolteacher, who says the animal continues to warm the hearts of everyone he encounters.

"His name was Joseph, and we have kept that, but we have added many nicknames which include 'Jojo', 'Jo Shmo', 'Yoseph', 'Joe', and 'Joey'. Whatever comes out first," she laughed.

Kornblum said that Joseph has easily adapted to being part of the family and is extremely comfortable, especially with his playmate, Bowser.

"After about a week of hand-feeding him, he began to become comfortable with us, and was excited to come out of his crate to greet us. Every morning, my nine-pound Shih Tzu greets him when he comes out of the crate, and they sniff and lick each other. They love to be close to each other," Kornblum said. But she said he prefers to stay inside the downtown Toronto home.

"There are tons of stimuli, which include construction trucks, construction men, loud cars, groups of people, etc. He is quite fearful and is unable to focus on anything but surviving. Although he doesn't anymore, he used to try and hide under cars and benches to escape the loud sounds," she said.

Kornblum got Joseph through the dog adoption programme led by Tammy Browne, director of the Montego Bay Animal Haven. Needing to secure a proper home for the dogs, Browne reached out to Save Our Scruff, a non-profit animal-rescue organisation in Canada, which welcomed her idea of having the mongrels migrated. When the dogs arrived, many persons, including Kornblum, were highly interested in becoming their new owners.

"Save our Scruff has a lengthy adoption process, where you fill out a ton of information and then they send you a picture of a dog whom they think might be a good fit. We saw Joseph's cute face and we were sold. We specifically wanted an adult dog who was low-energy, and Joseph is the laziest and most affectionate boy we've ever seen," she joked. "He had two tick-borne diseases, but they are all treated, and his blood cell count is good. He was very stinky when we first got him, but after a bath he was as good as new."

Kornblum said when she first met her four-legged friend, he was terrified and refused to leave his crate. However, it didn't take long for her to win him over with a piece of liver. Joseph has taken quickly to the new cuisine.

"He particularly loves our one-two ingredient treats, such as liver and blueberries, chicken and cucumber, pork and beets. He gets chicken feet, bacon sometimes, and plain chicken. He's reacting wonderfully, and seems extremely grateful and loves eating our of our hands. He has recently learned the sound of the treat drawer opening, and always greets us with a 'sit' as he knows this is what we're going to ask for. He's a smart guy," Kornblum said.

She said that she has been associated with dogs all her life, having worked at a guide dog centre in Israel. She has also taken in many other dogs into her home.