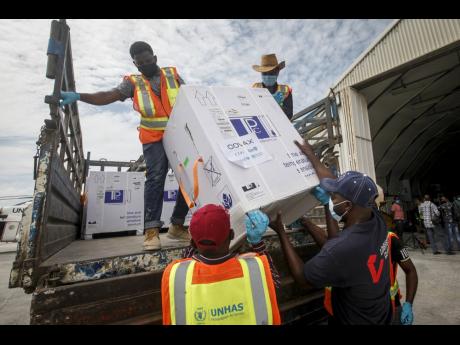 In this March 15, 2021, file photo, boxes of AstraZeneca COVID-19 vaccine manufactured by the Serum Institute of India and provided through the COVAX global initiative arrive at the airport in Mogadishu, Somalia. AP Photo/Farah Abdi Warsameh, File)

LONDON (AP) — As many as 60 countries, including some of the world’s poorest, might be stalled at the first shots of their coronavirus vaccinations because nearly all deliveries through the global program intended to help them are blocked until as late as June.

COVAX, the global initiative to provide vaccines to countries lacking the clout to negotiate for scarce supplies on their own, has in the past week shipped more than 25,000 doses to low-income countries only twice on any given day.

Deliveries have all but halted since Monday.

During the past two weeks, according to data compiled daily by UNICEF, fewer than 2 million COVAX doses in total were cleared for shipment to 92 countries in the developing world — the same amount injected in Britain alone.

On Friday, the head of the World Health Organization slammed the “shocking imbalance” in global COVID-19 vaccination.

WHO Director General Tedros Adhanom Ghebreysus said that while one in four people in rich countries had received a vaccine, only one in 500 people in poorer countries had gotten a dose.

The vaccine shortage stems mostly from India’s decision to stop exporting vaccines from its Serum Institute factory, which produces the overwhelming majority of the AstraZeneca doses that COVAX counted on to supply around a third of the global population at a time coronavirus is spiking worldwide.

COVAX will only ship vaccines cleared by WHO, and countries are increasingly impatient.

Supplies are dwindling in some of the first countries to receive COVAX shipments, and the expected delivery of second doses in the 12-week window currently recommended is now in doubt.

In a statement, the vaccine alliance known as GAVI told The Associated Press that 60 countries are affected by the delays.

Internal WHO documents obtained by the AP show the uncertainty about deliveries “is causing some countries to lose faith in the COVAX (effort).”

That is prompting WHO to consider speeding up its endorsement of vaccines from China and Russia, which have not been authorised by any regulators in Europe or North America.

The WHO documents show the U.N. agency is facing questions from COVAX participants about allotments in addition to “uncertainty about whether all those who were vaccinated in round 1 are guaranteed a second dose.”

WHO declined to respond specifically to the issues raised in the internal materials but has previously said countries are “very keen” to get vaccines as soon as possible and insisted it hasn’t heard any complaints about the process.

Concern over the link between the AstraZeneca shot and rare blood clots has also “created nervousness both around its safety and efficacy,” WHO noted.

Among its proposed solutions is a decision to “expedite review of additional products” from China and Russia.

WHO said last month it might be possible to greenlight the Chinese vaccines by the end of April.

Some experts have noted that Sinopharm and Sinovac, two Chinese-made vaccines, lack published data, and there are reports of people needing a third dose to be protected.

Other experts worried that delays could erode faith in governments that were particularly efficient in their vaccination programs and were counting on second doses soon.

Earlier this month, the WHO appealed to rich countries to urgently share 10 million doses to meet the U.N. target of starting COVID-19 vaccinations in every country within the first 100 days of the year.

So far, countries have pledged hundreds of millions of dollars to COVAX.

But there are simply no doses to buy, and no country has agreed to immediately share what it has.