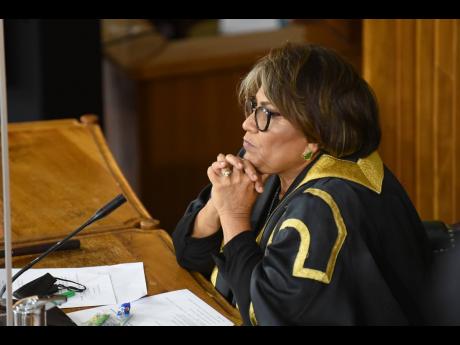 Speaker of the House of Representatives Marisa Dalrymple-Philibert.

Speaker of the House of Representatives, Marisa Dalrymple-Philibert, yesterday shut down a motion brought by the parliamentary opposition seeking the suspension of Westmoreland Central Member of Parliament George Wright.

Leader of Opposition Business, Anthony Hylton, brought the motion to the floor but was stopped by Dalrymple-Philibert who described it as "necessary but premature". The matter relates to a viral video which shows a man viciously beating a woman. The police have indicated that a report has been made by both the woman in the video and the embattled MP.

Has not been identified

Dalrymple-Philibert said that the Parliament had to be careful as the male in the video, who was abusing the woman, has not been identified. She also said that there are no complainants in the matter.

"I have seen the video and what I have seen in the video cannot be condoned, whether it be by a member of parliament or the man on the street," the speaker said.

"I want to make this country be aware of the fact that domestic violence will not be tolerated by this Government or this Parliament at any time," she added.

The speaker said that the rules of Parliament and the laws of the land would make it improper to allow the motion.