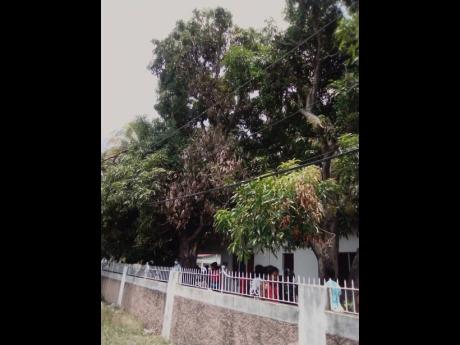 Residents of Hamilton Gardens, Spanish Town, St Catherine, gather in the yard where Anthony Nuby was electrocuted on Monday.

The Jamaica Public Service (JPS) is advising persons to desist from climbing or cutting trees that have power lines running through them.

This message was reinforced following the electrocution of two men in separate incidents this week. Speaking with THE WEEKEND STAR, JPS' director of communications Winsome Callum said the premises' owners are responsible for keeping the trees trimmed.

"If the trees have already grown into the power lines, do not attempt to cut it or pick any fruit from it," she said. On Monday, 17-year-old Anthony Nuby of Tawes Meadows, St Catherine, was electrocuted when he attempted to pick mangoes from a neighbour's tree. Callum said that whenever a tree has grown against a power line, the premises owner should contact JPS, who will then turn the electricity off to allow him/her to cut the tree.

"A lot of persons don't know that they should call JPS to turn off the lights. I think someone from the JPS who have knowledge about these things needs to either come and do it or inform us of what we can do because communication is everything," she added.

In the other incident which occurred on Wednesday in St Mary, it is alleged that the deceased attempted to move a wire out of the road when tragedy struck.

"Do not touch power lines that are broken or fallen in the road. They may be de energised but the general rule is that one must always treat the lines as energised. Do not touch the line even if it appears to be a cable line. Just assume that all of them belong to JPS and stay away from them," Callum said.