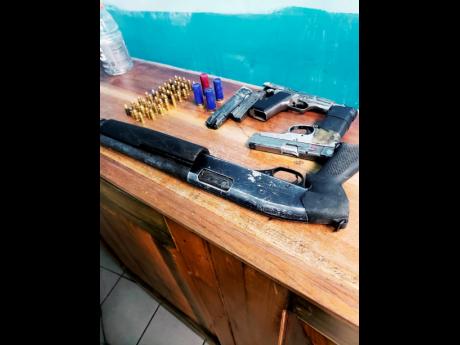 The three illegal guns and ammunition seized on Wednesday by the security forces in Woodside, Clarendon.

Three illegal guns and a motor vehicle were seized in Woodside, Clarendon, on Wednesday as the funeral for slain gangster, and Clarendon's most wanted man Fitzroy 'OJ' Coore was being held.

Several people who were at the funeral have been taken into custody as persons of interest. Coore, who led the Lion Paw Bushman gang, based in Effortville in the parish, was killed by police during an intelligence-based operation in Manchester, on Sunday, December 27, 2020.

Head of operations of the Clarendon police, Superintendent Christopher Phillips, told THE STAR that police personnel were monitoring the funeral procession when they observed suspicious activities which triggered a joint police-military operation.

Information from the police is that the operation led to the raid of a premises around 11:30 a.m, where a Smith and Wesson handgun, one Winchester shotgun and a single-action Browning were seized.

"It is interesting to note that all weapons were loaded and charged," disclosed Phillips, adding, "We suspect that persons ran from the premises."

The find comes weeks after two illegal handguns and nine 9mm rounds were reportedly seized in a joint police-military operation, also in Woodside.

Coore was linked to several crimes including the shooting of a two-year-old, and the double murder of Malaino March and Stephen Sharpe in August 2019. The police also named him as a person of interest in at least 11 murders and four shootings in Clarendon, and a member of a criminal network operating in Clarendon, Manchester, St Elizabeth and St Catherine.

Phillips, asserting a zero-tolerance towards crime in the parish, said there would be increased policing in certain communities.

"The Clarendon Police Division will continue to actively monitor and assess the criminal intelligence on our most problematic communities," he added.

Imploring youth to deter from pursuing a life of crime, he said "As we work hard to ensure a safer Clarendon, we want to say to our youngsters who we observe are bent on living a life of crime to desist, as the police will continue to respond and offer the kind of service that will guarantee the safety of our communities in Clarendon."