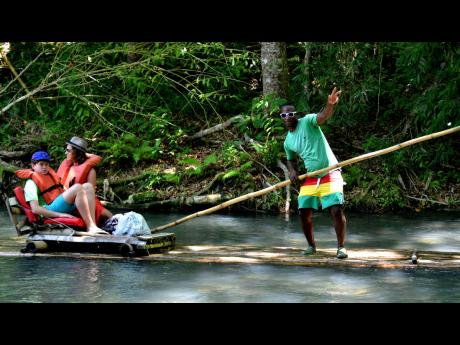 In this 2019 photo, a raft captain takes tourists on a trip down the Martha Brae River.

Raft captain Everton Brown has described the fallout in earnings due to the COVID-19 pandemic as a touch of hell. The 21-year veteran is among the 80 raft captains who depend on the Martha Brae River in Trelawny for an income.

"I have an 83-year-old mother who needs constant care. The little savings I had disappeared quickly. Two persons supported me during this time in hell. Joseph Palmer gave me food for myself and my mother. Vicky Brown, my mother's granddaughter who lives in the United States, sent what she could afford weekly," Brown said.

The Martha Brae River rafting facility is heavily dependent on tourism. Jamaica has not welcomed a cruise visitor since COVID-19 arrived on the shores. Some 464,348 came to Jamaica between March last year and this year, a significant decline in visitor arrival considering that the country welcomed 4.3 million visitors in 2019.

Rafting on the Martha Brae is a three-mile journey along the winding river, which at one time transported sugar to the harbour at Rock, near Falmouth. This was before Falmouth replaced Martha Brae as the capital of Trelawny in 1770.

Tourism Minister Ed Bartlett, speaking in Parliament on Tuesday, expressed optimism that there will be growth in visitor arrivals this year.

"We hope to welcome 1.043 million stopover visitors, which is a 117 per cent increase over last year's stopover numbers," he added.

Brown, while looking forward to a rebound in the industry which would fuel demand for his raft tours, said he will no longer be depending on rafting solely for his bread.

"COVID was bad, but it taught me a lesson -- don't put your eggs in one basket. The fruits and vegetables I used to buy are now grown in my backyard," he said.

"I survived because friends and family helped. Were it not for them I would have died, not from COVID, but from hunger. Despite the ill effects of COVID, I can now see life differently. What was taken for granted is now more appreciated," Anderson said.

Neville Brown, who has been rafting on the Martha Brae since 1981, told THE STAR that it is locals who have been keeping their rafts afloat.

"Since December I have been pleasantly surprised about the number of locals who have come to enjoy the experience. They come with their liquor and boom box, maintain social distance, and have a jolly good time," Brown said. "The three-mile journey used to take one hour. Now that time is too short."