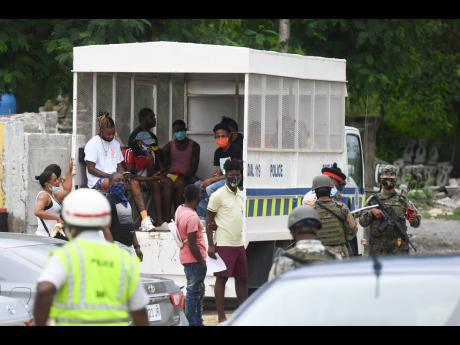 Eight persons were on Thursday charged with breaching the Disaster Risk Management Act (DRMA) when they appeared before the Kingston and St Andrew Parish Court.

Seven other persons are also charged, but were not present in court. The court heard that on March 20 at 9:30 p.m., a group of persons was seen along the roadway in the Kingston 14 area, in a social setting. The islandwide nightly curfew started at 8 p.m.

Of the eight persons, only Thomas pleaded not guilty. Smith told Parish Court Judge Lori-Ann Cole-Montague that although he was guilty, he was only at the bar to buy a drink.

"Your Honour, the bar shutter was closed and everybody was about to leave. Same time, the police dem come and just haul up the shutter and tell everybody seh fi join a line and go outside. Everybody get arrested," Smith said. Cole-Montague, however, agreed with the actions of the police, stressing that no one should be on the road at 9:30 p.m.

THE WEEKEND STAR has received information that between April 12-22, more than 170 persons have appeared in the Kingston and St Andrew Parish Court for breaching the DRMA. Thomas should return to court on June 17.