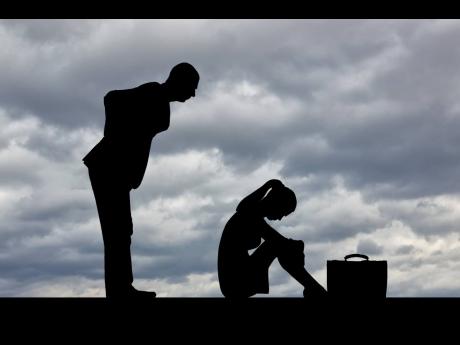 A couple yesterday agreed to end their relationship after the husband pleaded guilty to beating his wife with a broomstick.

The man, who appeared before the Kingston and St Andrew Parish Court on a charge of assault occasioning bodily harm, was ordered by Parish Court Judge Lori-Ann Cole-Montague to pay the complainant $80,000 for injuries she sustained.

The court heard that the man beat his wife with a broomstick. He provided an explanation for his actions. "She was talking on the phone and I told her to have respect for me," he told the court. "Why is it you thought that she didn't have respect for you? Is it who she was talking to or the time of day?" Cole-Montague asked.

The man said his wife was having a conversation with a man, whom he knows. He also alleged that his wife was armed with a knife at the time of the incident.

The man told the court that since the incident, he has been receiving death threats from members of his wife's family.

"Sir, please report that matter to the police. Listen to me madam, please tell your family to stay out of this. The same way I warn off men about threatening women, I'm warning you. You have a matter before the court, let the court deal with it. Things don't work out when you parting and let me tell you, when people parting, try to make it as clean as possible," Cole-Montague said.

The man initially paid $20,000 and is expected to return to court on May 21. Before they left the courtroom, Cole-Montague cautioned the couple to live in peace and respect each other.

"Clearly the relationship not going to work out, so she's going to talk to other people and text message people all hours of the night. That don't mean that you should stand up and listen to her all the time," the judge said.