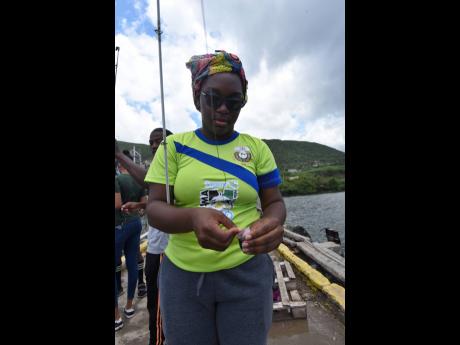 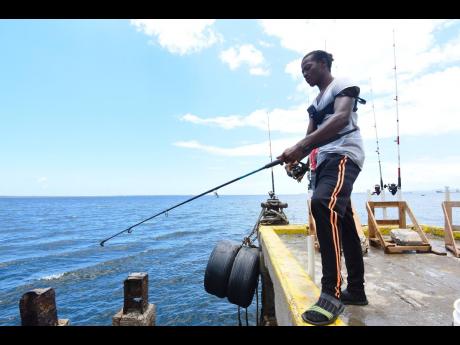 Errol Tello fishes from the docks of the Carib Cement Company in Kingston. 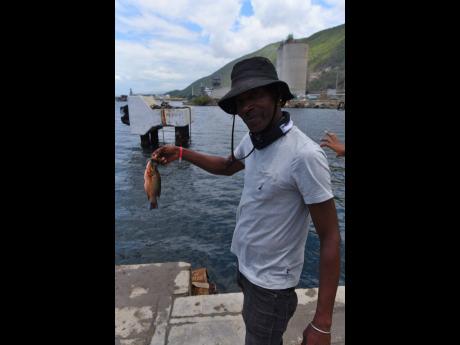 Mark Watson shows off one of his catches.
1
2
3

It was sheer excitement at the Carib Cement Company dock last Saturday as Mark Watson reeled in his fishing line as he and other fishers were anxious to see what was clinging to his bait.

THE STAR team was just in time to capture the moment as a red snapper emerged from the Kingston Harbour on Watson's line. The group, residents of Harbour View, visit the dock weekly to do recreational fishing which they say is very healthy.

"Fishing releases the endorphins and adrenaline. That's what fishing does for me," Errol Tello said. Tello started fishing two years ago, after observing an elder in action one Sunday at the Kingston waterfront.

"I asked him 'how you catch fish without bait?' And when he swim up back, he said 'if you want to learn, swim out in the morning and I will show you'. I spent a week out there with him and he showed me how he did it. He showed me the kind of fish he catch, how he catch the big fish and from then, I fall in love with it," Tello shared.

Other members of Tello's group could not conceal their happiness as they reeled in their first catches of the day. They had been at the dock since 5:30 a.m. gathering live bait. Tello said they would normally leave the dock at nights, but due to the COVID-19 curfew, they retire from fishing early.

"Most of the times when you come out here early, you see the fishes in action. This morning I saw a big mackerel jump out as high as the platform to chase the bait. I have seen big sharks out here and sting rays. One of us almost caught a 100-pound tarpon out here already," he said.

Shantae, an employee at the Norman Manley International Airport, said she has been fishing in the Kingston Harbour since 2010. Now 22, she said she makes it her duty to be at the dock every Saturday and Sunday.

"My father got me into fishing. The first time I catch a fish was over airport road and it was really exciting. Although it did little bit 'bout suh, it was really nice," she said.

The group told THE STAR that there are many days that they leave empty-handed. However, they are not discouraged. They say fishing has taught them patience and created a competitive spirit among them.

Watson said fishing is the perfect recreational activity for him, especially since the pandemic has hampered his ability to earn an income.

"Most of the times I'm indoors. I can't stay home every day, I have to come out and shake up my bones. This is my exercise," the 54-year-old said. "I wish I could come out here every day for the rest of my life. I would love to turn it into a career. It's euphoric when I'm out here. When you drawing in something, it's the uncertainty of what you catch and how you bring it, if you actually going bring it up, and the best part is when you get to carry it home and cook it. Trust me it's a best feeling."