Wayne Green gets a kick out of auto body repairs 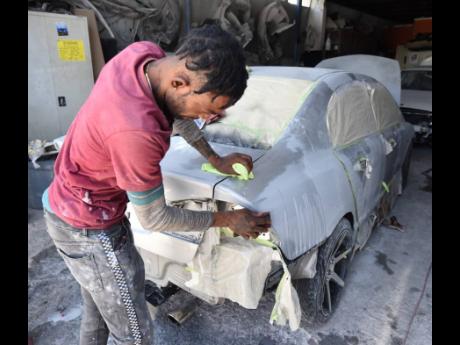 Kevin Wilson is hard at work. 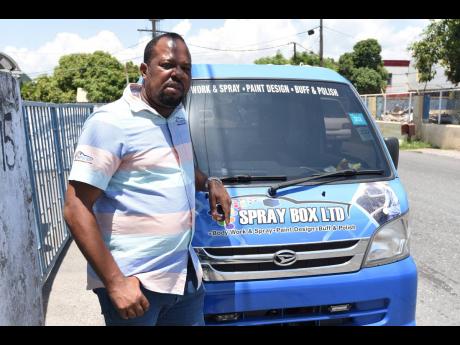 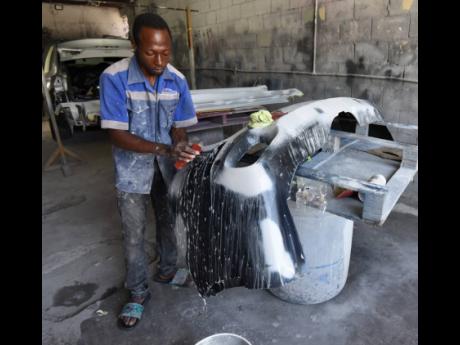 Odane Green washes a car bumper in preparation for spraying.
1
2
3

While growing up, Wayne Green had an eye on becoming an architect. But, when he left his aunt's house in Job Lane, St Catherine, to live with his father in Richmond Park, St Andrew, that dream slowly vanished. He was not able to complete his secondary education at St Catherine High School and had no clue of his next move.

At 17 years old, Green was approached by an old woman, whom he called Miss Baresh, when he sat idly outside his Richmond Park home. She told him that it was necessary to learn a trade. That conversation, he said, opened his eyes to the realities of life.

Green said Miss Baresh carried him to a garage on Minnott Terrace, where he received on-the-job training in auto body repairs for a year. After six years of training and apprenticeship at various garages, Green decided to step out on his own.

"I was on the road every day with my friends, sit down outside a chat, and she pick me out of a crowd of people and carry me go learn a trade. First I learnt mechanic, but it was too greasy, so I chose this trade," he told THE STAR.

He developed an affinity for the trade as a means of creating his independence. Growing up in Job Lane, Green said he was less fortunate than others his age, and the economic situation did not change when he moved to live with his father.

"I had to learn a trade because I don't have any education and I don't believe in poor life. I love it now because I am meticulous, I see everything and I like to do something and say 'I did it'," he said.

The job of an auto body repair technician involves the repairing, refinishing and replacement of fixtures on a motor vehicle. More commonly known as a 'body man' who sprays a car, Green told the news team that there is more to the job than meets the eye.

"If you want a better word for it, I call it collision repair. I straighten chassis, I take out sinks and respray the car," he explained.

THE STAR team visited Green at his Beechwood Avenue, St Andrew business, Spray Box, yesterday. He had a staff of 11, who were seen completing various auto repair tasks.

"You must have an eye and a love for detail," the gifted body man said.

Green said that he enjoys every aspect of the job.

"You have to have a natural love for it. I have invested in a lot of tools, and the fact that I have invested in tools is because I love what I do. I love doing a car and see it come out good," the 42-year-old said, beaming with pride.

His garage was packed with vehicles, which appears to be a vote of confidence in his abilities and workmanship. He opened Spray Box 18 years ago and plans to get a bigger location for his business.

Green said that his motivation to expand is not only tied to his growing clientele, but his desire to help young men to gain experience and training in auto body repair.

"I want to help train more youths because to me, cars will never stop coming to the garage. Tradesmen are getting lesser, they are migrating, so I want to get more youths involved. We lack certain tools in Jamaica that are in other parts of the world, and I want to get a tool that if a task takes an hour, the tool tasks 20 minutes. I want to share the knowledge, and it's better to invest in the youths," Green said.