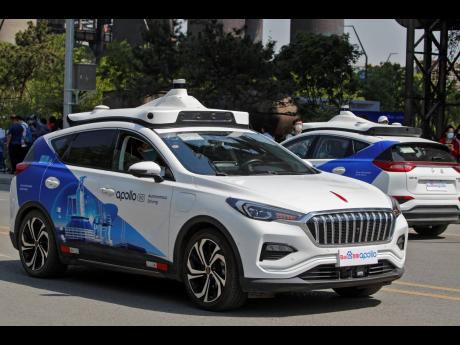 Baidu Apollo Robotaxis move on a street at the Shougang Park in Beijing yesterday.

Unlike previous Baidu autonomous driving demonstrations in Beijing, this was the first time there was no safety driver sitting behind the wheel. Instead, a safety member was seated in the front passenger seat to deal with any emergencies.

Up to 10 Apollo "robotaxis" are now operating simultaneously in an area of about three square kilometres (1.2 square miles), picking up and dropping off passengers at eight stops in Shougang Park in western Beijing.

The robotaxis were repeatedly forced to brake when encountering jaywalkers or curious tourists who came close to the vehicles for photos.

Kelly Wang and her husband, who both work in the artificial intelligence industry, said they had a smooth riding experience.

"I would recommend people experience this. There is a strong sense of technology, because nobody is in the driver's seat," Wang said. Her husband was even considering buying such a car for their household.