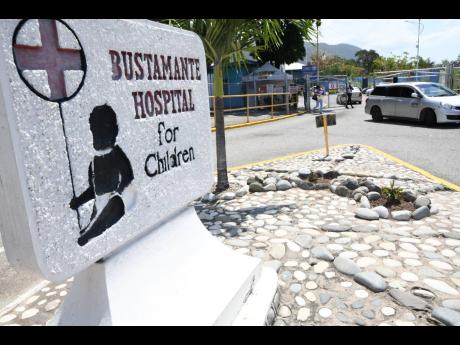 The Bustamante Hospital for Children.

The mother of a four-year-old boy who was badly burnt, allegedly by a teenager in their St Catherine community, doesn't believe lawmen are doing enough to bring the perpetrator to justice.

The recent incident has left the child with extensive burns to his body. He is undergoing treatment at the Bustamante Hospital for Children.

"The boy (the alleged perpetrator) has been up and down and all about from him burn up me baby. I saw him on Saturday going into a taxi with another friend so why the police can't arrest him?" the disheartened mother told THE STAR. "To make it worse, none of the youth family member don't even call me to find out if my son is OK and that should not be the case." The mother said that she hired the teen, who usually does gardening, to trim her yard.

"He came over to my house to cut the grass and he was there until everything done and him go and take a seat. My 12-year-old daughter say to him 'You nah go home go bathe and you done work' and she jokingly splash some water on him and she went inside," she said. "By time she must come back outside, him light the mouth of a bottle he had with gas and throw it at her but she dodge it and it catch the four-year-old."

The mother also alleges that the teen had also sprinkled some of the flammable liquid on a doorjamb. "The fire even blaze up bigger from the doorjamb too and could have burned down the house," she told THE STAR. The mother is demanding that some justice be given to her family.

"I feel so sad about the situation because my baby life will change forever. Right now he is traumatised," she said. THE STAR can confirm that a report was made to the police, however, the news team could not get a comment from the lawmen on the status of the investigation.