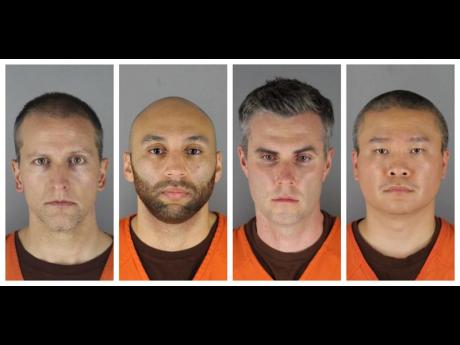 MINNEAPOLIS (AP) — A federal grand jury has indicted the four former Minneapolis police officers involved in George Floyd’s arrest and death, accusing them of willfully violating the Black man’s constitutional rights as he was restrained face-down on the pavement and gasping for air.

Specifically, Chauvin is charged with violating Floyd’s right to be free from unreasonable seizure and unreasonable force by a police officer.

Thao and Kueng are also charged with violating Floyd’s right to be free from unreasonable seizure, alleging they did not intervene to stop Chauvin as he knelt on Floyd’s neck.

All four officers are charged for their failure to provide Floyd with medical care.

Floyd’s May 25 arrest and death, which a bystander captured on cellphone video, sparked protests nationwide and widespread calls for an end to police brutality and racial inequities.Chauvin was also charged in a second indictment, stemming from the arrest and neck restraint of a 14-year-old boy in 2017.

Lane, Thao and Kueng made their initial court appearances Friday via videoconference in U.S. District Court in Minneapolis. Chauvin was not part of the court appearance.

Chauvin was convicted last month on state charges of murder and manslaughter in Floyd’s death and is in Minnesota’s only maximum-security prison as he awaits sentencing.

The other three former officers face a state trial in August, and they are free on bond. They were allowed to remain free after Friday’s federal court appearance.

Floyd, 46, died after Chauvin pinned him to the ground with a knee on his neck, even as Floyd, who was handcuffed, repeatedly said he couldn’t breathe.

State prosecutors say Thao held back bystanders and kept them from intervening during the 9 1/2-minute restraint.

Chauvin’s attorney, Eric Nelson, argued during his murder trial that Chauvin acted reasonably in the situation and that Floyd died because of underlying health issues and drug use.

He has filed a request for a new trial, citing many issues including the judge’s refusal to move the trial due to publicity.

A message left for Thao’s attorney wasn’t immediately returned, and a call to Lane’s attorney disconnected when he was reached by The Associated Press.

The Rev. Al Sharpton said the federal charges against the officers show the Justice Department “does not excuse it nor allow police to act as though as what they do is acceptable behavior in the line of duty.”

“What we couldn’t get them to do in the case of Eric Garner, Michael Brown in Ferguson, and countless others, we are finally seeing them do today,” Sharpton said.

Conviction on a federal civil rights charge is punishable by up to life in prison or even the death penalty, but those stiff sentences are extremely rare and federal sentencing guidelines rely on complicated formulas that indicate the officers would get much less if convicted.