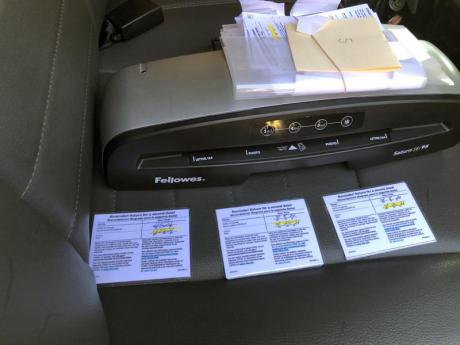 SACRAMENTO, Calif. (AP) — The owner of a Northern California bar where authorities say made-to-order fake COVID-19 vaccination cards were sold, to undercover state agents for $20 each, was arrested in what officials call the first such foiled operation they are aware of nationwide.

The plainclothes agents from California’s Department of Alcoholic Beverage Control said they were told at the Old Corner Saloon in Clements to write their names and birthdates on Post-it notes and then watched as employees cut the cards, filled in identifying information and bogus vaccination dates and laminated the finished products.

Vaccination cards are being used in some places as a pass for people to attend large gatherings.

The European Union is considering allowing in tourists who can prove they have been vaccinated.

In California, officials have allowed venue operators to offer easier access to people with proof of vaccination.

That includes preferential access to large events such as concerts and sporting events and allowing venues to create vaccinated-only sections where social distancing requirements are not as strict.

They also reported seeing at least eight others buy fake cards, but haven’t uncovered how many were sold.

They returned to the small-town bar this week and arrested its owner.

Agents said they found another two completed cards and 30 additional blank cards along with a laminator and cutting device.

“This is such a new case. We looked for some other guidance from other cases around the country and we haven’t been able to find one like this at all,” Blehm said.

Fake cards have been advertised on social media and online sales platforms, he said, prompting the California attorney general’s office to send cease and desist warnings to those entities.

But it’s the first example he’s found of someone selling cards out of a bar.

With just one such report so far, California law enforcement and regulatory agencies said Friday that they’re not mounting the kind of sustained task force approach they used last summer to make sure business owners were following safety guidelines designed to slow the spread of the coronavirus.

“If we see this, we’ll do an investigation and take action on it,” Blehm said. “This is on the radar, but this is the only one we know of so far.”

But federal, state and local officials on a joint task force that looks for criminal activities are keeping a watchful eye, said Brian Ferguson, a spokesman for the state Office of Emergency Services.

“They actively are looking for stuff like this,” he said.

"They’re looking for folks that are doing things like selling vaccines or fraudulent vaccines on the open market, vaccine cards.”

The FBI and U.S. Department of Health and Human Services’ inspector general in late March warned the public “to be aware of individuals selling fake COVID-19 vaccination record cards and encouraging others to print fake cards at home.”

It wasn’t immediately known if the bar owner, Todd Anderson, has an attorney who can speak on his behalf.

No one answered the phone at the bar Friday.

Anderson was arrested on suspicion of three felonies, including identity theft, forging government documents and possession of an unregistered firearm.

He also is accused of falsifying medical records, a misdemeanor.

“It is disheartening to have members in our community show flagrant disregard for public health in the midst of a pandemic,″ San Joaquin County District Attorney Tori Verber Salazar said in a statement.

“Distributing, falsifying or purchasing fake COVID-19 vaccine cards is against the law and endangers yourself and those around you.”