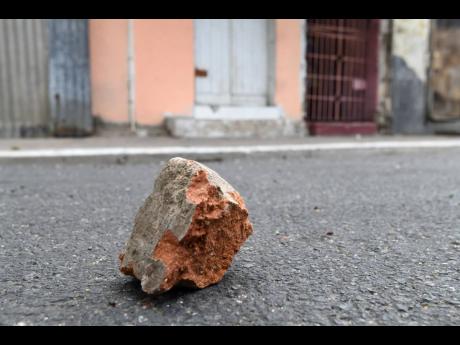 A woman pleaded guilty to assault occasioning bodily harm, and stone throwing in a public place when she appeared in the Kingston and St Andrew Parish Court on Thursday.

The court heard that Latifah Gordon threw two stones, one of which hit the complainant in the left eye.

Gordon pleaded guilty to the offences but provided an explanation.

"Your Honour, her brother fling a stone so I just fling back one," she said.

Chief Parish Judge Chester Crooks responded, seeking clarification, "Her brother fling a stone? And you fling back a stone and it hit her? Was she flinging stones at you?" he asked.

Gordon denied that the complainant threw stones at her.

"She had nothing to do with you. So you're saying you hit her by accident?" Crooks asked.

"Well in law, we call that transferred malice," he said.

The complainant said that she had to seek medical attention at a private medical facility as a result of the injury. She said that the nerves in her eye have been damaged, resulting in $55,000 in medical bills.

Judge Crooks asked Gordon if she had carried money to court to compensate for damages, to which she said she had $50,000 in her possession.

The complainant added that she has an upcoming doctor's appointment, to seek to ease the pressure she is feeling in her left eye. She explained to the judge that she has not been able to see properly since the incident.

"Miss Gordon, I'm going to make a note that the money is a down payment. So I'm going to put another date where both of you come back and if there are additional expenses please let me know. So it is possible that you will have to pay more money," the judge said.

He advised Gordon to walk with at least $50,000 when she returns to court on June 8 for sentencing.