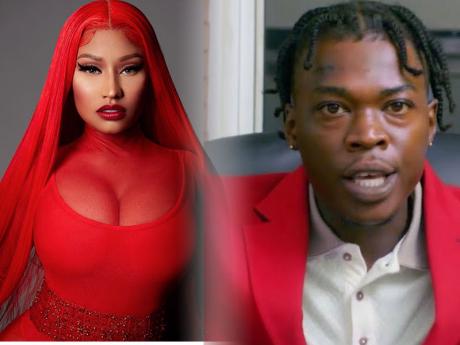 After being dragged last week for a post and delete of a pending collaboration with Rap Queen, Nicki Minaj, dancehall artiste Skillibeng had the last laugh.

Social media has been in a frenzy since it was announced last night that the Eastsyde artiste did indeed land a collaboration with the 10-time Grammy-nominated artiste.

The announcement was made by Minaj herself during a Instagram Live session last night when she revealed that she hopped on the remix for Skillibeng's hit single, Crocodile Teeth.

The entertainer was making her grand return to the social media space and the music scene following a brief hiatus after the birth of her son.

It has only been 12 hours since its release, and already the song has massed over 600,000 views and is the number three trending song on the local YouTube trending chart. With all the chatter surrounding the record, it is expected to hit the top spot by the end of the day.

In an interview with THE STAR, producer Johnny Wonder revealed that Nicki Minaj's team reached out to be a part of the remix.

He said, having listened to the beat and the lyrics of the song, Minaj took a keen interest in Crocodile Teeth.

He went on to say that despite doubt from naysayers, the collab is proof that young dancehall acts have what it takes to pull the attention of international artistes.