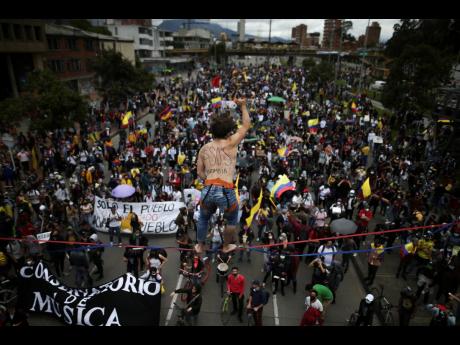 A tight rope artist stands over demonstrators as they march during an anti-government protest in Bogota, Colombia, last Wednesday. Colombians have taken to the streets for weeks across the country after the government proposed tax increases on public services, fuel, wages and pensions, but have continued even after President Ivan Duque walked back the tax hike.

Guyana's Ministry of Human Services says that 110 young boys, aged three and under, were abused during the first quarter of this year.

The ministry, in releasing the figure yesterday in observance of the International Day of the Boy Child, also said that over a total of 404 boys were abused during the same period.

"I'm sure you'll agree with me that the tendency has been to pay more attention to the girls and protect them, while we show less consideration to the boys. While it is true that more girls are abused, sexually and otherwise, let's not be deceived into thinking that the same thing doesn't happen to boys," said Minister of Human Services Dr Vindhya Persaud in a statement.

The minister said that in the first quarter of 2021, it was found that 635 girls were abused.

The Government of the Cayman Islands has removed the PCR-testing requirement for returning travellers who have completed their COVID-19 vaccination course with the Health Services Authority.

The announcement, which also maintained a ban on carnival parades, was made through a statement Friday evening outlining amendments to existing COVID-19 regulations.

The Dominica government has welcomed the island's certification for the elimination of mother-to-child transmission of HIV and syphilis, saying it is a step towards Dominica's achievement of its sustainable development goals.

"What we are celebrating here this evening is truly a remarkable achievement. Dominica has been able to maintain 95 per cent or more coverage of ante-natal care and skilled attendance at birth," Prime Minister Roosevelt Skerrit told the ceremony at which the World Health Organization (WHO) certification was made.

Skerrit said that there has been no recorded cases of mother-to-child transmission of HIV and syphilis in Dominica over the past four years.

The Pan American Health Organization (PAHO) said that seven other Caribbean countries and territories have received the dual certification. They are Cuba, Anguilla, Antigua and Barbuda, Bermuda, Cayman Islands, Montserrat and St Kitts-Nevis.

The Central Bank of Trinidad and Tobago (CBTT) has announced a new moratorium on the regulatory treatment of payment deferrals or restructured loans due to the measures put in place by the authorities to curb the spread of the coronavirus (COVID-19) pandemic.

In a letter sent to all institutions licensed under the Financial Institutions Act and copied to the Bankers Association of Trinidad and Tobago and the Institute of Chartered Accounts of Trinidad and Tobago, the CBTT said that it notes "with concern the difficulties currently being faced by our national community as we face the effects of the ongoing pandemic and the potential hardship that it presents to customers of financial institutions".

The CBTT said that it had previously extended an initial moratorium on deferred loans in March last year, which was subsequently extended twice within 2020 and came to an end on December 31, 2020.

"However, having regard to the new circumstances, the Central Bank considers it appropriate to reintroduce a moratorium on the regulatory treatment for rescheduled loans due to "skipped payments" or rate reductions and past due facilities for the period May 1 to September 30."