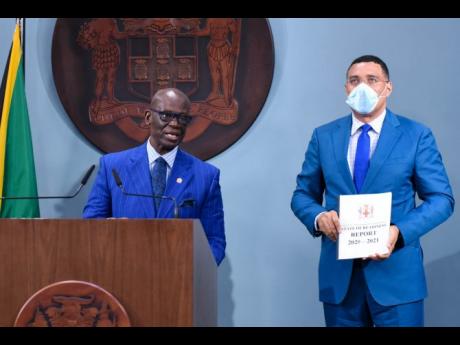 Prime Minister Andrew Holness (right), and Minister of Local Government and Rural Development, Desmond McKenzie (left), during the launch of the national hurricane preparedness campaign for the 2021 Atlantic hurricane season, at Jamaica House, on June 1.

Prime Minister Andrew Holness, has launched the national hurricane preparedness campaign for the 2021 Atlantic hurricane season, which lasts from June 1 to November 30.

The campaign, which is being spearheaded by the Office of Disaster Preparedness and Emergency Management (ODPEM), aims to increase public awareness of all hazards, increase visibility island-wide, create a culture of compliance, strengthen public knowledge to cause- behaviour change in how Jamaicans plan and prepare for disasters, as well as increase youth involvement in community outreach projects and programmes.

The campaign is guided by the theme ‘Hurricane Readiness in Trying Times’.

Speaking at the official launch at Jamaica House on Tuesday, Holness said ODPEM plays the lead role in the achievement of the objectives as the national disaster coordinating agency.

“ODPEM in collaboration with national, regional and international agencies is committed to taking proactive and timely measures to prevent or reduce the impact of hazards on Jamaica, its people, natural resources and economy,” he noted.

The Prime Minister said he has instructed the National Disaster Committee to direct its attention to a number of priority areas, including readiness of shelters and shelter operations; the cleaning of priority drain infrastructure; as well as the enhanced public education and awareness initiative.

He pointed out that the National Works Agency has already started its mitigation/mobilisation regarding the cleaning of drain infrastructure, and noted that the shelters are in an advanced state of readiness.

“Public education is an integral part of our approach to increase public awareness and engagement to support the disaster preparation and emergency management activities of the ODPEM. The Jamaican people will gain greater understanding of disaster risk management to be able to prepare for disasters, emergency situations and emerging hazards, allowing them to properly, intentionally and actively protect and safeguard themselves, family and property, thereby ensuring hurricane readiness in trying times,” he said.

The Prime Minister noted that during the past year, the country successfully managed the COVID-19 pandemic as well as the impact of flood rains from Tropical Storm Zeta and Eta.

“The concurrent health and weather events put our emergency systems and response readiness to the test. The Government applauds our front-line workers and emergency management personnel for the hard work during this most challenging circumstance,” he said.

“Like we have done successfully in the past year, our strategy must be to anticipate, plan and prepare for the threat, not to panic if or when it materialises. Let’s remember the tagline, ‘disasters happen, be prepared’,” Holness added.

He pointed out that the Government is taking the necessary measures to strengthen preparation activities and implored Jamaicans to heighten their level of preparedness for disasters.

“I want to appeal to you the members of the public; disasters will happen; we should get prepared,” he said.

Meanwhile, Director, Meteorological Service of Jamaica, Evan Thompson, said the 2021 season is expected to be an active one.

Thompson said the country remains vulnerable to activities from tropical cyclones in six months of the hurricane season.

“This means that throughout every month, there is a level of vulnerability that Jamaica has, being in the Northwestern Caribbean,” he added.