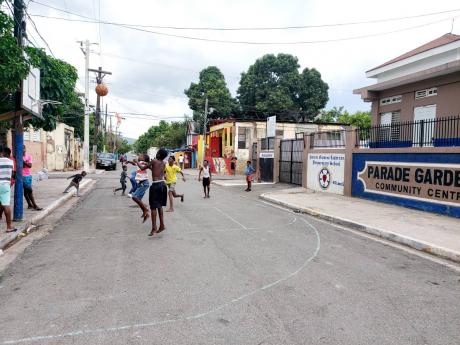 Youngsters enjoy a game of basketball on the streets of Parade Gardens in downtown Kingston.

Howard Carr, who resides in the fractious Parade Gardens community in central Kingston, believes that sports could be a useful tool in quelling the crime and violence that have besieged the area.

Parade Gardens has been enduring a bloody spell in recent times as young men aligned to the Genasyde and Darkside gangs run riot in the area.

The Kingston Central Police Division has recorded 31 murders in 2021, an increase of seven per cent when compared to the corresponding period last year. Shootings in the area have gone up nearly 30 per cent, police data shows.

Carr, 40, known throughout the community as 'Bumpy', said he has seen where sports has helped to turn around war-torn communities and is convinced it could work in Parade Gardens.

"Back in 1995 to bout '97, round yah suh did a buzz. Every evening you would see the young yute dem come out and watch di big boys dem play either basketball or football. Nobody never have time fi war. Wi need back something like that fi help restore di peace," Carr said.

He said that he has been trying for years to get support for a sports development programme in the community, but with limited success.

"If yuh look along Rum Lane, Fleet Street, George's Road and Law Street, yuh will see a lot of abandoned buildings. For years now mi a try get a $2 million fi turn one a dem building deh into a sports arena.

The self-employed Carr said he is tired of watching young boys matriculating into gang warfare.

"Mi deh yah and witness how the violence entice some of the likkle youth dem who did a watch wi play ball, but because the support scarce, wi cyah keep dem fi long. We di residents have to find a way to help the authorities get things under control," he said.

Senior Superintendent of Police Maldria Jones-Williams, who is the commanding officer for the division, said she would welcome such a move while also reiterating that the police are doing everything to curb the violence.

"Every day the police have been in the area patrolling. There is not a day that I can recall where we are not there. We will continue until we have control of the situation," she said.

Meanwhile, Kellie Magnus, country lead for Fight for Peace in Jamaica, notes that sports is used as a method to be bring about peace in communities.

"We have a programme there that does exactly that, so we support these works in Parade Gardens and a few other communities because that is what we do at our organisation Fight For Peace," Magnus said.

"You can use sports as a way to support young people who are living in communities where there are high levels of violence ... I am very interested to hear what this resident has planned, and if there is any way that we can work together," she said.

At the same time, Dr Christopher Charles, who is a professor of psychology at The University of the West Indies, Mona, said community intervention programmes must be properly structured.

"Sports can be used to change certain skills and teach behaviour, but just playing it won't change the behaviour. That is why it will need people who understand mental pathology, and conduct disorder and behaviour modification. Sports will work but it has to be part of a structured and measurable intervention," Charles said.