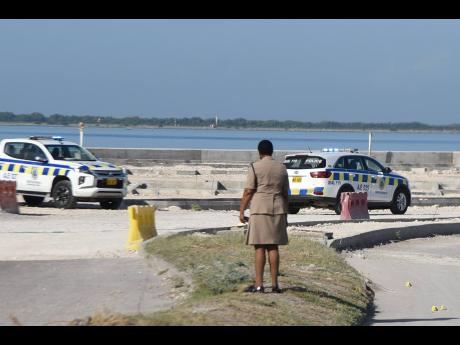 Police investigate the shooting incident near the Rae Town Fishing Village in Kingston on Wednesday. It is reported that four persons were shot by unknown assailants.

Residents say they have been living in fear as a deadly gang feud continues to wreak havoc. The gun violence continued early Wednesday morning when armed men entered the Rae Town Fishing Village and opened fire. According to the police's Corporate Communications Unit, three men and a woman were wounded during the attack, which is the latest in a string of drive-by shootings in the division over the past year.

"I think the police can take control of the situation. The have the capacity to, mark you, they need some support yes from the (Police's) High Command and the Ministry of National Security," said Williams. "So what we need to do now is get more boots on the ground. The introduction of the Quick Response Team is helping and I have been seeing them a lot. But to increase the video surveillance at some of these major intersections will eventually curtail the drive-bys." Williams was referring to the national closed-circuit television surveillance programme dubbed JamaicaEye.

"If we increase the surveillance capacity of the force, perpetrators will realise that they can no longer do a drive-by and get away because they are on camera. To some extent, it will act as a deterrent and I think we need more of that in the areas. We have a couple but more needs to be implemented," Williams said.

Fed up with the violence

Residents have pleaded for a zone of special operations to be declared in the area. Williams said it is an indication that the people are genuinely fed up with the violence.

"If you go in and sit down and reason with some of these young men who are labelled and stigmatised as gangsters, you'd realise that a lot of them want the place to be nice, enuh. Dem want peace, enuh," he said. "The majority of them want a peaceful community. Dem wah play football, dem wah can go a dem party or look fi dem likkle girlfriend. I know man who wah leave fi go work but dem fraid fi go."

Williams said that he has had several meetings with residents along with the Peace Management Initiative and the police, and that his office has been extending support to the relatives of the victims.

"We try our best to reach out to everyone, it is a sad state of affairs. You do have factions in the community who are bent on evil and we have to face that reality. I want them to understand that it is families that they leave grieving and mourning, and they have families too. The good book says 'Love yuh neighbour as yourself. Respect your neighbour as you'd respect yourself'. If we do this, we will have a better community," he said.