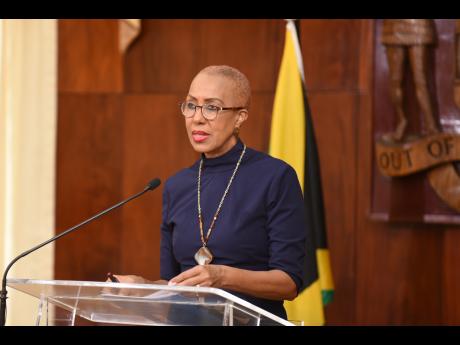 Minister of Education, Youth and Information, Fayval Williams, says that the Grade Six Ability Test component of the Primary Exit Profile (PEP) was successfully administered on May 26 in collaboration with school leaders.

She said that all the scripts are now being checked and graded. She noted that the release date and the weighting of the scores are to be determined, noting that the information will be released as soon as it is available.

Minister Williams, who was addressing Wednesday’s (June 9) post-Cabinet press briefing at Jamaica House, said preliminary reports indicate that approximately 33,000 students were present for the assessment. The Ministry had reported that 37,179 students were registered to sit the test.

Minister Williams informed that one student was reported to be infected with the coronavirus (COVID-19) and preparations were made for the student to sit the exam safely.

“Another student was reported to be in the hospital and, as per usual, staff was deployed to the hospital to support the student in completing the assignment,” she noted.

Placement of students in high schools will be done using the May 26 Ability Test scores combined with the results of the Grade Four Performance Task in Language Arts and Mathematics that the students would have taken in 2019.

Meanwhile, as it relates to grades four and five, Mrs. Williams said that the Ministry has sent out notification informing that those assessments will be done in the first semester of the next school year.

Additionally, she said diagnostic tests, which commenced on May 25, are ongoing and are scheduled to end on June 18.

These tests are being administered for students from grades one to nine.