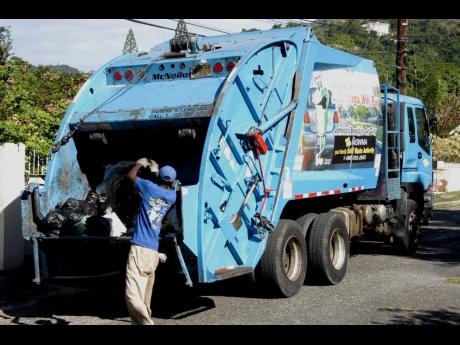 A video was uploaded to social media showing the quartet being held up at gunpoint. The police say they were robbed of cell phones and other items by a gunman who was travelling on a motorcycle.

"I want to use this medium to appeal to persons out there that what we do is quite beneficial to society. Without us, everyone would be walking on garbage and we want persons to have a little more respect for the sanitation crew. Care about them! But this is now showing us that while we thought that there is a level of respect for our collection and sanitation crews, it is not there," he said.

Edmondson, while stating several logistic challenges, also said that the NSWMA will decide the way forward as it relates to protecting its staff.

Some level of immunity

"We are still gathering information on the situation, but it is one that is unfortunate. There was a time when we felt that we had some level of immunity that we could come out early and get the streets ready for pedestrians and vehicular traffic," he said. "It is hard to put in a security protocol when you have 80 trucks out there and all over the place. It is already a costly business, the country is going through a pandemic and to now think about added cost is difficult. Yes, we are talking about lives."

Edmondson noted that the agency sends out 50 trucks per day in a particular area.

"Yes, maybe we can install some panic buttons in the trucks from security companies, but this is new to us. It is not a daily occurrence but I am sure we will look at ways to improve on this," he said. Meanwhile, the police's Corporate Communications Unit has confirmed that the garbage collectors have reported the incident and an investigation has commenced.