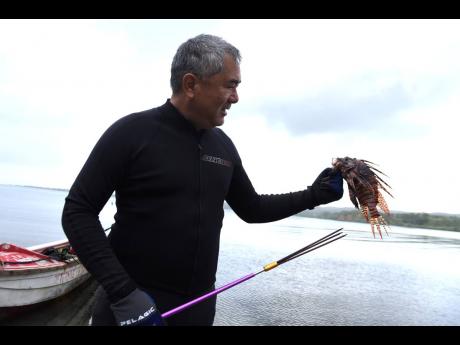 James Chen shows off one the many lionfish he caught during a trip to St Thomas. 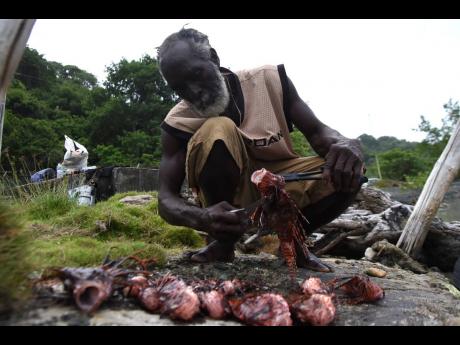 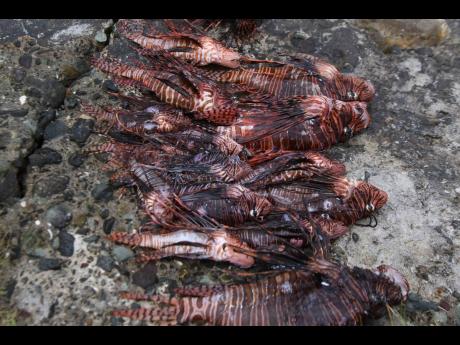 The skill and precision with which James Chen handled the highly toxic lionfish betrays the fact that he is no novice when it comes to dealing with the invasive creature. James and his wife, Deborah have made a habit of catching the aquatic creature.

"I have been fishing lionfish for about 10 years now, ever since they started to come to Jamaica. We use a pole spear as opposed to a spear gun and what that does is allow you to spear them very quickly. The pole has less power than the gun, but it is easy to get them off and into the tube that we use to store the fish until we get to shore," James told THE STAR.

The lionfish is a voracious predator, believed to have entered Caribbean waters from a protected environment in the United States, following a natural disaster in 1992. Many Jamaicans have been eating lionfish as one way of helping the overall fish population.

With a small tube showcasing their catch, James and Deborah were among a few other friends who has just alighted from the waters of the Bowden Harbour in St Thomas when THE STAR visited last Saturday.

Admitting to being fearless in his pursuit of the venomous marine fish, James said that spearfishing the feather-finned species is quite simple, once careful.

"They don't move very fast because they have no natural predators as other fish know to stay away from them so you can go right up to them. They go from our spears to the tube so it's not like we have to handle them under the water and we learned how to deal with it in terms of cutting off the spines," he said sharing that he has never been hurt by a lionfish.

However, a fisherman in the area Rudolph Bailey, who was busy gutting the day's catch, has not been so lucky.

"As it sticks you, is pure pain immediately. I know that bissy is good for poisoning so when I got home I made some strong bissy tea and drink, and the other day I was good. They are very dangerous so you have to know how to handle them. You hold them with the pliers and use the scissors cut off all the bones on the outside preventing it from sticking you," he said.

Deborah, meanwhile, captures the fishing moments underwater and assists her husband in preparing the catch, which she describes as "pretty tasty".

For the past 30 years, James and Deborah have been visiting various places across the island on weekends to fish, depending on the weather.

"It's not good for them (lionfish) to be on our reefs but they are pretty tasty so the guys catch and we have them for dinner when we get home," she said. "You will also see restaurants serving them now which is good because it means fishermen will make money on it and it will help to get rid of some of them off the reef, though they breed quite prolifically so there will always be more. We saw some lobsters too but it is closed lobster season now so we didn't trouble them."