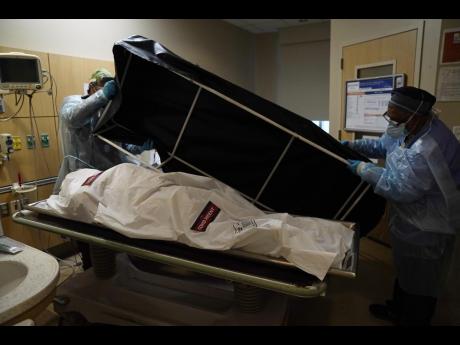 FILE - The U.S. death toll from COVID-19 has topped 600,000, even as the vaccination drive has drastically slashed daily cases and deaths and allowed the country to emerge from the gloom. (AP Photo/Jae C. Hong, File)

The United States death toll from COVID-19 topped 600,000 on Tuesday, even as the vaccination drive has drastically brought down daily cases and fatalities and allowed the country to emerge from the gloom and look forward to summer.

The number of lives lost, as recorded by Johns Hopkins University, is greater than the population of Baltimore or Milwaukee.

It is about equal to the number of Americans who died of cancer in 2019.

Worldwide, the death toll stands at about 3.8 million.

The milestone came the same day that California and New York lifted most of their remaining restrictions, joining other states in opening the way, step by step, for what could be a fun and close to normal summer for many Americans.

“Deep down I want to rejoice,” said Rita Torres, a retired university administrator in Oakland, California.

But she plans to take it slow: “Because it's kind of like, is it too soon? Will we be sorry?”

With the arrival of the vaccine in mid-December, COVID-19 deaths per day in the US have plummeted to an average of around 340, from a high of over 3,400 in mid-January.

Cases are running at about 14,000 a day on average, down from a quarter-million per day over the winter.

The real death tolls in the US and around the globe are thought to be significantly higher, with many cases overlooked or possibly concealed by some countries.

President Joe Biden acknowledged the approaching milestone Monday during his visit to Europe, saying that while new cases and deaths are dropping dramatically in the US, “there's still too many lives being lost,” and “now is not the time to let our guard down.”

The most recent deaths are seen in some ways as especially tragic now that the vaccine has become available practically for the asking.

More than 52% of all Americans have had at least one dose, while almost 44% are fully vaccinated, according to the Centers for Disease Control and Prevention.

But demand for shots in the US has dropped off dramatically, leaving many places with a surplus of doses and casting doubt on whether the country will meet Biden's target of having 70% of all adults at least partially vaccinated by July 4.

The figure stands at just under 65%.

As of a week ago, the US was averaging about 1 million injections per day, down from a high of about 3.3 million a day on average in mid-April, according to the CDC.

At nearly every turn in the outbreak, the virus has exploited and worsened inequalities in the United States.

CDC figures, adjusted for age and population, show that Black, Latino and Native American people are two to three times more likely than whites to die of COVID-19.