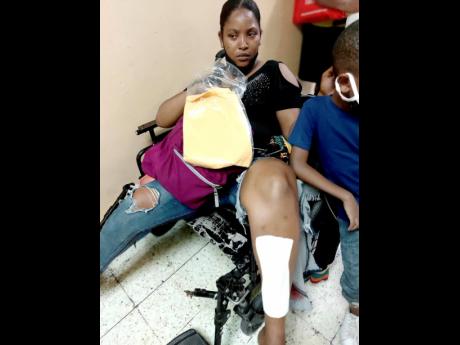 A St Mary mother who recently buried her sister said the intervening hands of God prevented lives from being lost in a two-vehicle crash in Temple Hall, St Andrew that left eight persons injured yesterday.

The frightening experience left a visibly shaken Kimberly Ennis nursing minor injuries but the 37-year-old told THE STAR that she believes it could have been worst.

"A Jesus and mi sister deh by mi side, but mi affi give God thanks! Mi just bury mi sister wah day yah and tek har children dem. A register mi go register dem a school. Di only thing mi couldn't do is bawl out Jesus when mi see the car a come," said the mother of four, while she sat in a wheelchair at the Kingston Public Hospital (KPH) awaiting further medical attention.

The crash occurred along the Temple Hall main road in the vicinity of the Epping gas station around 3 p.m. At the time of the incident, Ennis was travelling in a taxi with her son and nephew heading to her home in Castleton Gardens, St Mary.

"Di taxi weh mi did tek first never know say mi did a go that far, so mi come out and a so mi end up tek another one. Di (driver of the other motor car) man just run straight ina wi! Mi grab mi son and a try fi grab mi nephew but him fly through di glass. Him, di buss seat and everything fly out," she said.

"Mi cyah tell yuh how mi feel right now, di whole a mi in a pain right now. All mi know mi shield him (her son) but mi nephew fly through the van. Mi did a wonder if him dead or sumpn, but there was a school yute standing at the bus stop. A him mi nephew end up drop pon," she said.

The injured persons were rushed to KPH's emergency room for treatment.

Data obtained from the Road Safety Unity dated June 15, show that 214 persons have died in fatal crashes since the start of the year. Sections of the Temple Hall main road are hotspots for fatal motor vehicle crashes, the latest being in April.

"A yesterday mi collect mi sister death certificate from mi mother fi bring go di school. It was very painful to look at mi sister death certificate and now this! Who would a tek care of mi children if mi did dead? A (children's) home dem would a go or sumpn, a dem things deh mi a think bout when it happen. Why dem affi behave so on the road? Mi give God thanks!" she said.

No further information on the accident was available when THE STAR contacted the police's Corporate Communications Unit. However, a sergeant who transported victims said that most of them have already given statements and an investigation has commenced.