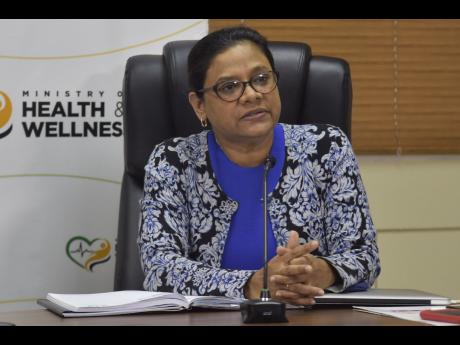 Chief Medical Officer (CMO) in the Ministry of Health and Wellness, Dr. Jacquiline Bisasor-McKenzie, is appealing for continued adherence to the COVID-19 health and safety measures during the summer period.

“We are going into a danger period. If we take the experience from last year … during the summer period, there were various activities and events that would have led to increased exposure and an increased transmission rate, so this is not the time to let go of your precautions,” she said.

She was addressing the virtual COVID Conversations press briefing on Thursday.

Dr. Bisasor-McKenzie informed that as of Wednesday (June 16), the major COVID-19 indicators have shown a decline.

She noted that communities that had consistent positive cases over the last two weeks have also shown a gradual decline in newly confirmed cases.

“We now have 243 communities of the 783 communities that have new positive cases over the last two weeks [which is] 31 per cent of communities,” she noted.

She said that the decline puts Jamaica’s geographical spread into the medium-level range. However, the Ministry is aiming for a less than 25 per cent community spread.

Meanwhile, Dr. Bisasor-McKenzie said that the island’s positivity rate, at 10 per cent, is still too high for the Ministry to consider any more relaxation of social distancing measures at this time.

“Where we need to get to is below five per cent for us to feel comfortable, especially approaching the summer period,” she indicated.

Dr. Bisasor-Mckenzie said that hospital admittance data have also shown fluctuations, which reflects that the island’s positivity rate is still too high.