Farmer finds 17 of his goats dead 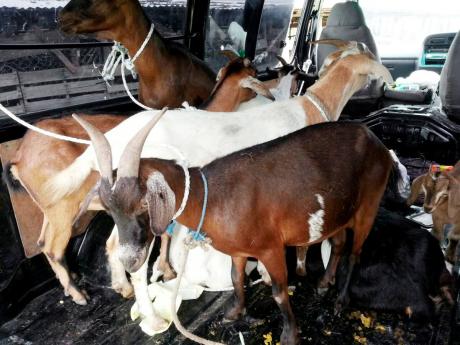 A St Elizabeth farmer who lost 17 heads of goat in one night has vowed to continue in agriculture, despite the major setback.

Matthew Clarke, of Treasure Beach in the parish, said the goats were found dead in his field on June 4. He estimated his loss to be in the region of $300,000.

"Some of the goats had bites to their necks, but the rest didn't, so I am wondering if the rest died from heart-attack or something ... . I don't think they were poisoned because all of them wouldn't die at once, and some of them would be foaming, but none of that was detected," Clarke said.

The 27-year-old farmer, who was overseas at the time of the attack, said he received a call from a cousin - who is the caretaker of the animals - who told him that something had gone wrong.

SET-UP FOR A COMEBACK

"He said someone had called him to tell him that dogs were barking in the field and the goats were crying. He lived just a two-minute drive away, but when he got there, he saw them all dead," Clarke said. He is viewing the setback as a set-up for a comeback.

"I am just going to fix up the pen better and buy back the goats. I am just calling it a loss and I am moving on. I only have eight left, but I am going to buy them back," he said.

The market for goat meat in Jamaica is said to be poised for growth. Minister of Agriculture and Fisheries Floyd Green, said Jamaica is importing between 80-85 per cent of the goat meat it consumes.