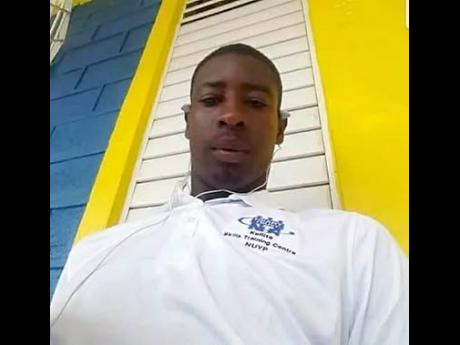 "My son is a good person," said Claire Bailey, the mother of Markland 'CJ' Hayles, the man accused of killing his girlfriend on Father's Day.

Hayles' 21-year-old girlfriend, Tashika McKay, who was eight months pregnant, was found with her throat slashed inside her home in Rhoden Hall in Kellits, Clarendon.

Angry residents attacked Hayles in a attempt to exact 'jungle justice'. The suspect, however, having been rescued by the police and placed in jail, died the next day after he was found hanging in his cell at the Lionel Town Police Station in the parish.

The police reported that during the distribution of meals, Hayles was seen hanging from the back vent grille of the cell by a cord and a merino. He was taken to hospital where he was pronounced dead.

While some of McKay's relatives expressed delight that the man who was suspected of killing her had died, Hayles' mother Claire Bailey is left to mourn her son.

"My son never in a police problem ... My son never caught up with police ... Never! He's a good guy. He's a good, good guy. Out of the three schools him went to, I never get a problem from a teacher about him, " she said of the Claude McKay High School past student.

The Independent Commission of Investigations (INDECOM) has began a probe into the circumstances under which the 20-year-old Hayles died. The police said that he was the only inmate in the cell at the time of his death.

INDECOM said that the cop who was assigned to cell guard duty has provided an initial account of the incident and will be required to furnish a statement to investigators. A post-mortem examination will also be done.

Meanwhile, Bailey has questioned the accuracy of police reports that he committed suicide and that he admitted to killing his girlfriend.

According to the police, Hayles, after being arrested on Sunday, was taken to the May Pen Criminal Investigations Branch where he confessed to the crime during a caution statement. "Him confess? Or them beat him fe talk say him confess? A must that," Bailey said.

She told THE STAR that Hayles, the second of her five children, was a hard-working man who was making preparations for the arrival of his daughter, who was due in July. The child would have been Hayles' first.

"He told me that he has a girlfriend and she is pregnant, and he tried to make the girl happy. He throw his partner money just fi the girl buy up the things them. My son is a good guy," she said. Hayles was enrolled in a culinary programme administered by the Human Employment and Resource Training Trust at the time of his death.