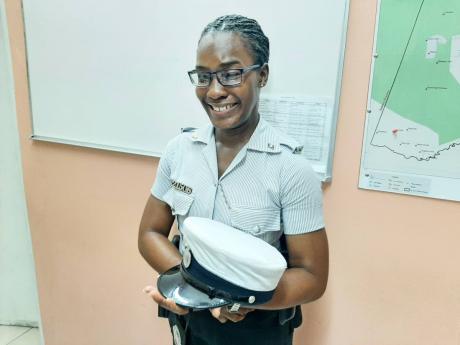 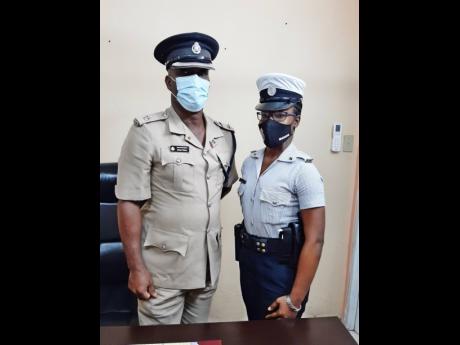 A video of a policewoman carrying an elderly man to a vaccination centre at the Bahia Principe Hotel in Runaway Bay, St Ann, last Saturday, has warmed the hearts of many.

The cop, Woman Constable Torra Lawrence, a St Thomas native, joined the Jamaica Constabulary Force in December 2019 and is now based in Ocho Rios, assigned to the Marine Police Division. She said she didn't think twice about helping the man.

"I grew up with my grandmother and my grandfather, and my grandmother was crippled for some years, quite a bit of years," Lawrence said. "Over the years, taking her to the doctor, I would have had the experience of having to lift her from the house to the vehicle, sometimes up staircases, to get to the doctor's office. So my grandma was one of the main reasons that, when I saw him, I reached out to help."

Lawrence was on duty with other officers at Bahia Principe when she noticed the elderly gentleman walking with a female, but not looking very sturdy.

"The woman informed me that he wasn't able to go any further and by the time she said that, he started leaning forward so I held on to him and I asked him, 'do you trust me?' to which he said 'yes,'" she said. "I asked him a second time, and he said yes again. So I looked at him and I said, 'Do you trust me enough to carry you?' He said yes and I said 'Are you sure?' He said yes. So, I lifted him and I started walking towards the main entrance."

'I have to record this'

Lawrence had no consideration as to his weight or distance. "I just had it in my head that he needed to get to the main gate," she said. Lawrence estimates that she might have been carrying him for about a minute before a man started videotaping her actions.

"There was this gentleman that was like, 'Oh my God, I have to record this,' and he started recording and no, I don't know him. And sometime after walking for a while he offered to help, so I said okay and I gave the gentleman to him," she said. Lawrence admitted that while carrying the man, who she estimates weighs between 120 and 130 pounds, her mask made it difficult for her to breathe.

"I thought it would have ended at the hotel because after it happened, the gentleman who recorded it, he kept saying to me, 'You are my hero.' But I didn't think it would have been posted and would've gotten this big now," she admitted. She later saw the elderly man and the woman, who both expressed appreciation for her help.

"I don't know them, I don't even know their names," Lawrence said. "I'm happy with what I did. It wasn't done for attention but I'll continue to just be me, do good and continue to learn from my superiors." Head of the St Ann police Superintendent Dwight Powell expressed delight at Lawrence's deed.

"Many unsung heroes in Jamaica are people who don't like the spotlight but people who get out there to do what we can to assist especially the less fortunate," Powell said. "So, I'm very gratified to have such a member working in the St Ann Division. When I spoke with the commissioner this morning, the commissioner was very pleased with the effort of the woman constable, knowing she didn't do it for any glory at all."