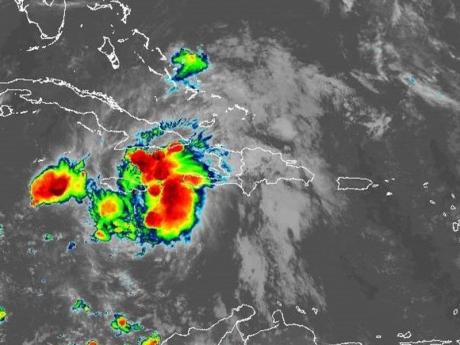 A tropical storm warning remains in effect for Jamaica as Tropical Storm Elsa remains just off the island's northeastern coast.

This means that conditions associated with a tropical storm are still expected today.

According to the Met Office, at 7:00 a.m the centre of Tropical Storm Elsa was located near Latitude 18.3 degrees North, Longitude 76.2 degrees West, or about 43 kilometres (26 miles) north of Morant Point, and 30 kilometres (18 miles) north-northeast of Port Antonio, Jamaica.

The Met Office says Elsa is moving towards the west-northwest near 20 km/h (13 mph), and a turn toward the northwest is expected tonight or Monday .

On the forecast track, Elsa will stay close to northeastern Jamaica over the next few hours and then move over parts of eastern Cuba later today.

By Monday, Elsa is expected to move across central and western Cuba.

The Met Office notes that some slight strengthening is possible today as Elsa approaches the south-central coast of Cuba; however, gradual weakening is forecast to occur tonight and Monday while Elsa moves across Cuba.

Weather conditions over Jamaica are currently being impacted by the heavy showers and thunderstorms associated with Tropical Storm Elsa.

Rainfall will continue to spread across most parishes this morning as the centre of the tropical storm remains close to the island.

Flash flooding is likely in low-lying and flood prone areas today with 75-150 millimetres (3-6 inches) of rainfall in the forecast.

Small craft operators, including fishers from the cays and banks, are reminded to remain in safe harbour until all warning messages have been lifted and sea conditions have returned to normal.