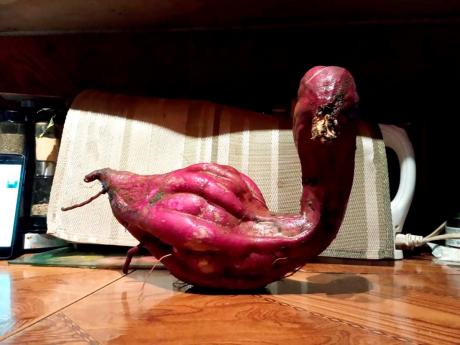 Farmer Oshane Robinson is hoping that a potato he reaped from his plot will bring him good luck and a bumper crop.

Robinson, who has leased land from the Sugar Company of Jamaica Holdings Ltd, has planted sweet potato, pumpkin, plantain and coconut on the 10-acre plot he has leased. While walking through the rain brought on by Tropical Storm Elsa, he observed a duck-shaped potato popping out of the soil. The strange tuber has been capturing plenty of attention from all who have seen it.

"I am not ready to start reaping but I decided to scratch the soil around it. I was careful not to destroy the tuber," he said. Robinson, who is in his second year of his lease, is heading into his second reaping.

"Not one of those reaped from the first acre I planted had anything unusual. I planted potato slips and I am about to reap a trophy potato for my mantelpiece," he said. The enthusiastic farmer has been showing his unusual potato to his friends. According to Robinson, one woman told him "Missa Robby mi nuh know a wha kinda sign, good or bad, but mi know dat a mus' sign." Robinson is hoping the 'sign' will be that he will reap a bountiful crop.