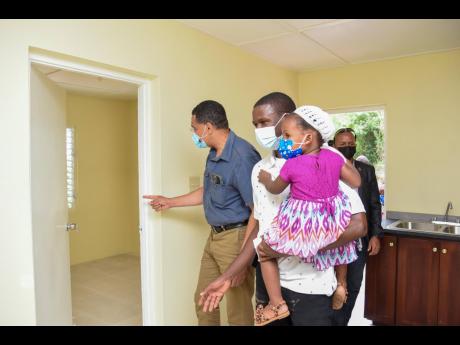 Prime Minister Andrew Holness (left), tours a new three-bedroom house in Ulster Spring with beneficiary Tristan Turner and his baby daughter Imani. The unit was one of three handed over to families in South Trelawny last Friday under the New Social Housing Programme. 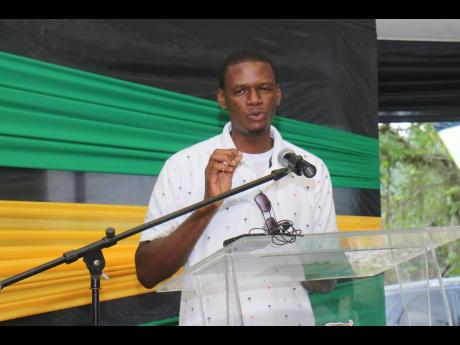 Thirty-two-year-old Tristan Turner of Ulster Spring, Trelawny, is now a proud owner of a three-bedroom 'castle,' thanks to the Government's New Social Housing Programme (NSHP).

After years of living with relatives or in rented rooms, Turner's dream of having his owned home came to fruition last Friday when Prime Minister Andrew Holness cut the ribbon to the house he was gifted and handed him the keys to the newly constructed building.

"It is a very good feeling I am feeling, as the new house was something we had anticipated for the longest possible time. We are very excited to be there and to actually be able to move in and enjoy it," Turner told THE STAR.

The father of three children was one of three residents of the Trelawny Southern constituency who got new houses through the initiative that was spearheaded by the Ministry of Economic Growth and Job Creation to improve housing for Jamaica's poor and indigent population. The other two beneficiaries, who were equally grateful, are Byron Reid of Albert Town and Sheranette Miller of Battersea.

Prior to receiving his new house, which comes complete with a bathroom, kitchen, and living and dining rooms, Turner and his wife and children were living in a family member's one-bedroom board-and-zinc structure. The family was one of 316 applicants who sought housing assistance through the NSHP, which was announced by Prime Minister Andrew Holness in 2018.

"The old house was our building which we had inherited, but I also did some amount of moving around and renting of different spaces. I was working before, but it was a situation where I got suspended from work," Turner told THE STAR.

"We had applied for assistance before, and we checked up on it again and we were told there was a project coming on that we would benefit from. It took some time, as things do not happen overnight, but we kept on renting and bunking with family," said Turner.

With his prayers answered, Turner is concerned about other persons who are in the situation that he has now left behind as, according to him, every person deserves to have their own living space.

"I once heard a certain political leader saying that housing is a right. We always hear about people receiving stuff and we wonder what their background is, but these houses that have been given out in Trelawny have renewed a hope in me that those persons who are in need, can benefit from this housing programme," said Turner.

There are other persons in Ulster Spring, a predominantly farming community, who are also in need of housing support and are hopeful that, like Turner, they are 'one bright day' is not far away.

"I am happy for him (Turner) and his family, and I am hopeful that one day I will also get my chance to smile," said Rochelle Watson, who described her current situation as "'kotching' with relatives".