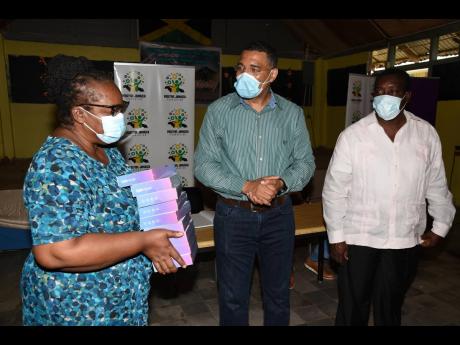 Prime Minister Andrew Holness (centre) talks with Uvelyn Barrett-Rose (left), principal of Labyrinth Primary School, shortly after he presented 10 tablet computers to the school during a handover ceremony. Looking on is Robert Montague, member of parliament for Western St Mary, in which the school is located.

Nickoy Steele was a picture of jubilation as he held one of the 40 tablet computers donated to four St Mary-based primary schools by Positive Jamaica Foundation last Friday.

Steele, 32, is a single parent of two students of the Jackson Primary and Infant School, who had difficulty accessing their online classes since the start of the pandemic. The other primary schools to benefit were Labyrinth, Donnington and Mason Hall.

The schools, that are in the constituency of Western St Mary, represented by member of parliament Robert Montague, received tablets to access online learning resources. The Carron Hall High School was also gifted a printer courtesy of Printware Online.

"This is something I always wanted, it was a need for them to do their school work and other learning activity. It was challenging without them having the tablet because dem have to use my phone to access the online service so me glad they get a tablet, it will be helpful," Steele shared with THE STAR.

He explained that his daughter, a grade-one student, and his son, a grade-four student, often shared his phone when they had online classes. Otherwise, they had to miss learning sessions. The school's principal, Michelle Thomas, said they had witnessed a decline in student enrolment due to connectivity issues.

"We were so elated when we got the call because we know that we have some less fortunate students who had neither access to Internet, nor a device and they weren't even on the PATH (Programme for Advancement Through Health and Education) programme and some of them, the parents had difficulty signing them up on the Own Your Device programme," she said. Thomas said that of those who did own devices, only 25-40 per cent had Internet.

"Those who didn't have the Internet, the parents would, when they could, purchase the service and use the phone. This donation will help a lot with the population that had difficulty," Thomas related.

In the handing over ceremony, Prime Minister Andrew Holness said 100 schools have been equipped with Internet connectivity to support online classes, due to a partnership between ReadyNet Limited and the education ministry. Donnington Primary is one of them.

"Due to Jamaica's terrain, it makes it very difficult to run fibre-optic cables underground or on poles throughout the interior, in the hills and valleys. We have developed a broadband strategy to bring broadband Internet access right across Jamaica. The strategy would mean that we would run the fibre-optics in close proximity to the population centre, and what it would mean is that you would get a spur off that cable coming to your gate," he said. Holness also urged the students to care for the instruments, as "these devices are not toys; they are a window for learning".