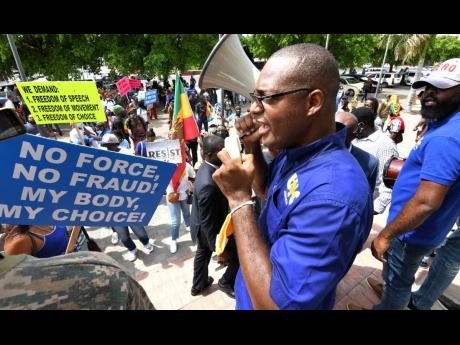 Joseph Patterson, of the United Independents’ Congress, speaks during a march in downtown Kingston last Wednesday.

The United Independents' Congress (UIC), whose leader, Joseph Patterson, was arrested last week for leading a demonstration against mandatory vaccination, is seeking to raise nearly $30 million to fund the legal defence of its members and followers.

Patterson, who faces charges of breaching the Public Order and the Disaster Risk Management acts, has launched a GoFundMe appeal dubbed 'HELP ME FIGHT FOR YOUR RIGHTS!', through which he is seeking to raise US$200,000 (approximately J$29.6 million). At press time last night, some US$1,270 (approximately J$188,000) was raised from 11 donors.

Three other persons, David Thompson, Kevaughn Harris, and Abigale Thompson, were arrested with Patterson for breaches of the Disaster Risk Management Act. The police have since said that they are now going through footage captured at last Wednesday's protest in downtown Kingston to arrest and charge persons who are deemed to have breached the law.

Patterson faces two charges under the Disaster Risk Management Act -- One for not wearing a mask and the other for being in a group of more than 10. Each charge attracts a maximum fine of $1 million.

Mindful that persons were slapped with fines of $200,000 in St Thomas for not wearing masks, Patterson's UIC said that the four persons who have been arrested "need your help to defend themselves as the Government of Jamaica seeks to make a national example out of them".

"We, therefore, expect the total fines for our freedom fighters to be millions of Jamaican dollars," the UIC said.

The political movement, which is a registered third party in Jamaica, said that it intends to provide "support for all freedom fighters who are currently being targeted by the police, even though they have committed no crimes".

The UIC last week said it is not anti-vaccine nor pro-vaccine, but rather pro-choice.

"We believe that individuals must be free to choose and must not have their right to bodily autonomy infringed upon. Informed consent is the key to preventing medical tyranny and this Jamaican government, as with other governments across the world, have ushered in medical tyranny by its forceful removal," the political party said.