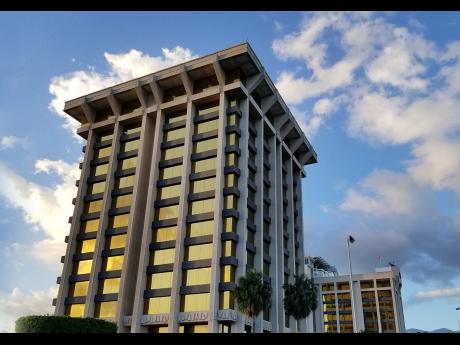 NCB Towers on Oxford Road in Kingston, where the central offices of Ministry of National Security are located.

Water leakages which resulted in flooding at the Ministry of National Security almost a week ago, has led to the relocation of staff until the damage on the affected floors has been repaired.

In a media release, Permanent Secretary at the ministry, Courtney Williams, said branches and divisions that require public access will be operating from Oxford House which is adjacent to Scotia Bank on 6 Oxford Road.

“Although some offices have been relocated next-door, mail will not be redirected given the short notice”, the Permanent Secretary noted.

He pointed out that the Corporate Services Division, Buildings and Facilities, Finance and Accounts and the Security Risk Reform and Transformation Branch will be operating from Oxford House.

Meanwhile Internal Audit and the Offender Management and Parole Branch have been temporarily relocated to Ripon Road, where the National Insurance Scheme is located.

The executive offices of the Ministers, Permanent Secretary and the Law Enforcement, Forensics, Border Security, Defence and Protective Security Division will remain on the 7th floor of the Ministry’s North Tower Offices.

The new arrangements are expected to remain in place for approximately one month.