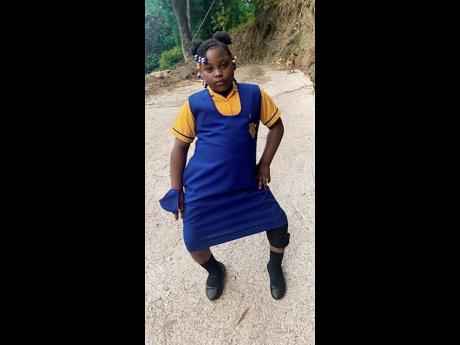 Roseanne Nembhard is struggling to accept the harsh reality that if her eight-year-old daughter does not receive a corrective bone surgery, her leg might be amputated.

Her daughter, Abriella Weasley, was diagnosed with Blount's disease when she was a few months old and has since undergone two corrective surgeries.

Blount's disease is a condition found in children that affects the growth plates around the knee. The disease causes the growth plate near the inside of the knee to either slow down or stop making new bone. Abriella's condition is progressively worsening with her legs widening more each day.

Nembhard explained that she knew something was amiss with her daughter's limbs when she began walking and would complain of feeling pain or discomfort when bending. Further inspection showed that Abriella's legs were bending wide, similar to the common condition known as Ricketts or 'bow legs'.

"I took her to the doctor and they told me that they would have to operate on her to correct the bone, 'cause it was really to straighten the bone. They did the surgery and I think the surgery took about five to six months before it got better. They did it again, and after I realise that they did the surgery, instead of the foot to show improvement, it get worse," the mother related.

Nembhard took her daughter to a bone specialist who recommended the use of two fixators to be implanted in both legs at the ankles and knees. The specialist also suggested corrective surgery to straighten the legs but the 33-year-old does not have the finances to offset the cost of the surgery. The domestic worker was moved to tears as she spoke of Abriella's current condition, which sees Abriella walking on her knees. Even though she has a knee strap, that does not suppress her pain.

"What I see she do is she walk and stop. Sometimes I have to lift her or if we going anywhere I have to get taxi to carry her. Most times when the pain take her and she can't manage fi stand up, she walk on her knee. To be honest, every day I cry 'cause me affi ask God why is it my child have to go through so much?" Nembhard quizzed, in between tears.

Abriella's academic performance as a grade two student at the Stony Hill Primary and Junior High School is affected as she does not attend school regularly due to her condition. She not only suffers intolerable pain but also fears teasing from students.

With a race against time, Nembhard is in dire need of the public's assistance to preserve her daughter's left leg which is severely bent. Nembhard told the news team that should Abriella's leg be amputated, she is not sure how she would cope. Her hope is that the medical procedure will be done before the year ends. She said that the bone specialist estimates that the surgery may cost more than $300,000 to correct each leg.

"To know that I brought a child in this world with both legs and to know that there's a possibility that she can lose the leg if I don't do the surgery, it's really hard. It's not easy to be a single parent and to be going through so much. I'm so scared for my child," Nembhard said.

Persons willing to contribute to Abriella Weasley's surgery may contact Roseanne Nembhard at +1 (876) 881-8442.