The king who welcomed two princes - After meeting Charles and Harry, Carlos Morgan hoped for a chance to connect with William 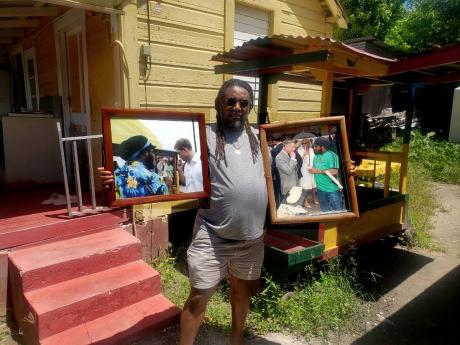 Carlos Morgan displays his framed photographs of himself and two princes. 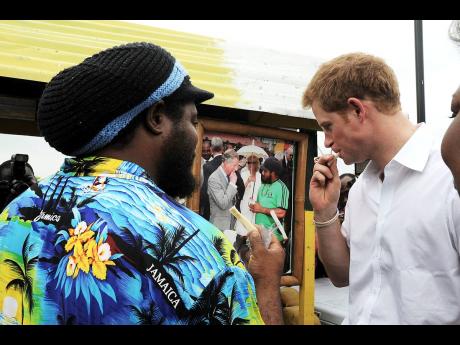 In this 2012 photo, sugarcane vendor Carlos Morgan (left) of Falmouth, Trelawny, shows Prince Harry a photograph he took with his father, Prince Charles, eating a piece of the sweet treat during a 2008 royal visit to the town. Morgan also treated the young prince to sugarcane during his tour of the Falmouth Pier.
1
2

Carlos Morgan, a fruit vendor from Falmouth, Trelawny, is a man with history wrapped all over him. Not only has he met senior members of the royal family but he has tantalised their taste buds with sweet sugarcane.

"I am the first and only man to stand beside Prince Charles and Prince Harry on separate occasion with a knife," boasted Morgan.

The historic moments of which he speaks occurred in 2008, when Britain's Prince Charles came to Jamaica, and then 14 years late, in 2012, when his son, Harry, visited as part of The Queen's Diamond Jubilee celebrations.

Morgan shared sugarcane with both Charles and Harry on their visits. He recalled being visited in Water Square, Falmouth, by Aloun Assamba, then High Commissioner to London, who enquired of his willingness to entertain Charles.

"I was told of the visit of Prince Charles to Falmouth and asked to entertain both himself and his wife, Camila. I accepted gladly because I am a king, and if a prince is coming to visit me, then I should welcome him," said Carlos, a Liverpool supporter.

He recalled that on the day Charles visited he not only provided him with sweet treats but also a history lesson of how sugarcane made England rich.

"I offered him a piece of cane, which he ate and nodded appreciatively to his wife," Morgan said.

When his son, Prince Harry, visited Falmouth in 2012, he requested to meet Carlos. The dreadlocked fruit vendor said that he found the young royal to be quite affable and down to earth.

"He told me that his father told him to ask for me. Once again, I stood beside him with my knife, sealed a joint of cane, and gave him. He ate it without trying to swallow the trash. We had a good laugh when I pointed out my observation," Carlos said yesterday, hours before Harry's elder brother Prince William landed in Jamaica for a royal visit.

William, the Duke of Cambridge, and his wife Kate, the Duchess of Cambridge, are on an eight-day tour of the Caribbean celebrating the Queen's 70th anniversary on the throne. The visit coincides with Jamaica's 60th year of political independence from Britain.

Unlike the last two royal visits, Carlos has been left out of the itinerary for the royal couple this time around. The fruit vendor admits that he would love to meet William and Kate, to at least "have a photographic moment".

Charles, Prince of Wales, is set to become King of England when his mother, Queen Elizabeth II, leaves the scene. Prince William is next in line.