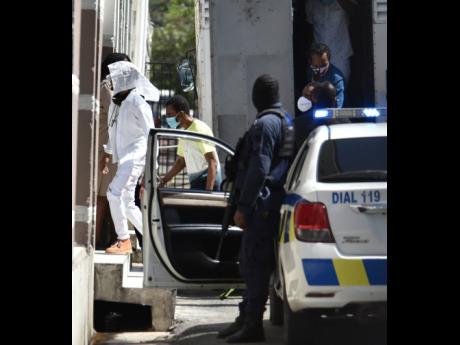 Alleged members of the Clansman-One Don gang arrive for trial at the Home Circuit Court in downtown Kingston.

On May 24, defence lawyers representing alleged One Don gang leader Andre 'Blackman' Bryan and 32 of his alleged cronies will start to argue their respective cases before Chief Justice Bryan Sykes in a bid to have the charges dropped and their clients freed.

The number of defendants for whom no-case submissions will be made is not yet known but Justice Sykes yesterday instructed the prosecution to prepare an outline of its case against each defendant and to share them with the registrar and defence by May 20, so that the lawyers will be clearer on what they are to focus on in their submissions. He issued the instruction after the prosecution wrapped up its case against the 33 defendants after calling its final witness in the Home Circuit Court where the defendants are being tried on an indictment with 25 counts under the Criminal Justice (Suppression of Criminal Organisations) Act and the Firearms Act.

The police witness, a detective constable, was called to the stand yesterday to establish the chain of custody in relation to nine spent shell casings that were recovered from a murder scene at a supermarket at Chancery Street, St Andrew, on August 17, 2017. The victim, Damaine 'Doolie' Forrester, who was said to be a don aligned to a faction of the Clansman Gang, was reportedly ordered killed by Bryan.

Forrester, who was employed at the supermarket as a cashier, was reportedly shot at point-blank range in his head multiple times. Incarcerated accessory to murder convict Tesha Miller is alleged to be the leader of the Clansman Gang from which the One Don Gang emerged. The police witness told the court that he was the officer who had collected the casings and submitted them to the government laboratory.

Following the close of the prosecution's case, attorney-at-law Kimani Brydson requested to have the prosecution's main witness recalled to the stand for further cross-examination. The witness is a former top-tier gang member and Bryan's driver who had secretly recorded conversations that he had with some of the alleged gangsters on three cellular phones and turned them over to the police. The trial was therefore adjourned until Thursday.

Meanwhile, Justice Sykes has asked the other lawyers who are desirous of asking further questions to come prepared on that day to make use of that window of opportunity. He also advised the lawyers who may want to have other witnesses be recalled to inform the Crown or the registrar by May 17.