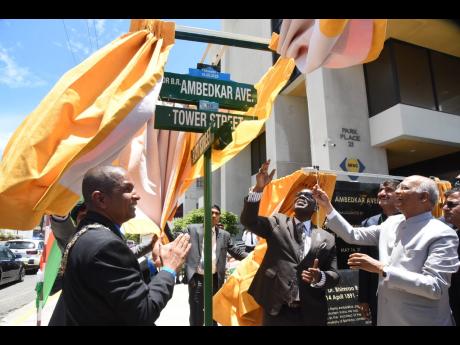 A part of Tower Street in downtown Kingston was today (May 16) officially renamed in honour of Dr Bhimrao Ramji Ambedkar.

Dr Ambedkar was a jurist, social reformer, and politician. He is also known as the Father of the Indian Constitution.

A monument highlighting the work of Dr Ambedkar was also unveiled by Minister of Local Government and Rural Development, Hon. Desmond McKenzie, and President of the Republic of India, His Excellency, the Hon. Ram Nath Kovind.

In his remarks, Mr McKenzie said it was important to recognise and pay tribute to an outstanding son of India, whose mark was felt not only in India but right across the world.

Mayor of Kingston, Senator Councillor Delroy Williams, said the city of Kingston has had a long tradition in the fight against discrimination, oppression and social injustice on continents across the globe.

He noted that Jamaica’s rich history and bonds with India date back to the 19th Century when indentured labourers from India arrived on the shores of Jamaica.

“To date, Indians continue to play a major role in the economic life of the city of Kingston. Indians have contributed to what our culture is, so we are greatly indebted to the people of India for who we are today as a city and as a people,” Senator Williams said.

“As Mayor, it is an honour for me to participate in this unveiling ceremony for the renaming of a section of Tower Street, namely from Church Street to Lower South Camp Road, in honour of Dr B.R. Ambedkar,” he added.

Meanwhile, President Kovind said “it fills me with great pride that one of the ablest sons of India has been recognised so far away from his home”.

He noted that some people may wonder about the relevance of Dr Ambedkar to Jamaica.

“Let us always remember that icons like Dr Ambedkar and Marcus Garvey cannot be limited to just one nation or community. Their message of equality for all and their appeal to end all forms of discrimination has universal resonance,” the President said.

“Therefore, Dr Ambedkar’s message is as relevant to Indians as it is to Jamaicans and to people in every part of the world,” he added.