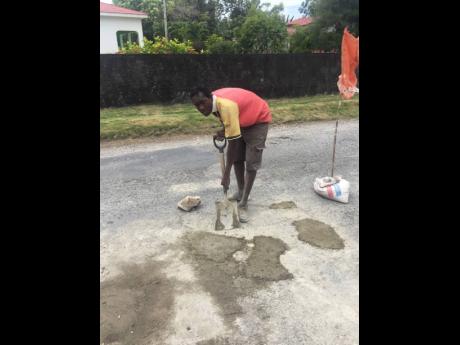 Herman Cousins, who said that he has spent the past 28 years of his life fixing potholes in Portland without payment, is outraged that he was charged with extortion and obstructing traffic by police on April 28 in Port Antonio.

He said that he was paving a section of the roadway in the parish capital when he was confronted by cops and taken to the Port Antonio Police Station. He said the incident has left him brokenhearted, as even the lawmen have benefitted from his handiwork.

"A from 1994 mi out deh and mi come out inna STAR and Gleaner and get all award from Boston Link Up Family and a now dem a come arrest mi. There is a police who all use to collect money and gifts from people fi mi so all of a sudden mi hear say mi a extortionist. Mi never extort anyone from mi born," he said.

While he sometimes gets assistance from motorists, Cousins said that he often has to dig into his own pockets to buy material to fix the roads.

"Sometimes, all business owner beg mi patch infront a dem business and all mi will ask dem to buy is the material. Mi nuh charge anybody more than if, when mi done, dem feel fi contribute, dem will do it. Mi nuh block off nuh road on anybody either, mi only block where the pothole is until the material dry," Cousins said.

The native Portlander said, although he is disappointed that he will be hauled before a judge, he will not stop fixing the bad roads.

"The following day after I was arrested, I was back on the road patching because I know I am not doing anything wrong. It's not about the money but, when I fix the road, it prevents people from even getting robbed, because they don't have to slow down," he said.

Head of the Portland Police Division, Superintendent Kenneth Chin, said that he is aware of Cousins' arrest, but said he will be given a chance to have his say in court on June 28.

"Anyone who is charged is always given that opportunity in the court. I am aware of the situation, as I have seen the police report," he said.