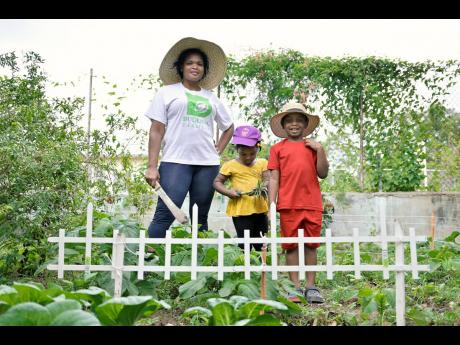 Mikayla-Ann Henry wanted watermelons. But instead of asking her mom to purchase the fruit, the then four-year-old and her brother, Matthew-Aiden, six, asked for help to plant the seeds that would bear the juicy treat they desired.

It was this interest from her children that led Grace Henry to develop Budding Farmers Jamaica, an entity that introduces farming to small children.

The seeds the children planted did not produce the quantity of fruit Mikayla-Ann wanted, but it piqued their interest in farming, and they wanted to plant more.

The family's farm has grown and now boasts an assortment of crops such as tomato, okra, sweet pepper, pak choi, lettuce, callaloo, and more.

The children, now five and seven years old, are co-founders of Budding Farmers Jamaica, a club that has engaged more than 300 children in the past year. They have been spot on with the knowledge they impart.

Through its Grow Club, children ages three to 12 have participated in virtual sessions and have started their own gardens at home.

Now, with the support of the Ministry of Agriculture and Fisheries, the Budding Farmers Grow Club will officially be rolled out in Jamaican schools in a face-to-face modality, starting in September.

"Budding farmers will be going into early-childhood and primary schools to teach children about the ins and outs of agriculture and how they can benefit from it. It will also include numeracy and literacy as part of the programme, because not all children will learn the traditional way," Henry said.