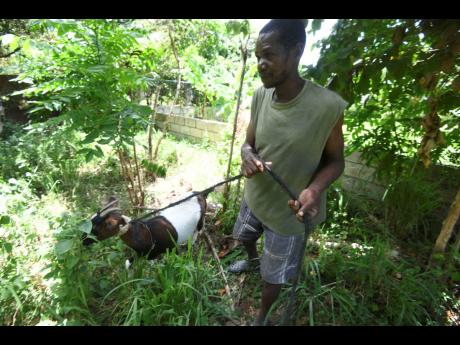 Photos by Ricardo Makyn/Chief Photo Editor Scott said that due to the water being expelled from the main road, he now has to tie his goats outside his farm, which he fears will result in them being stolen. 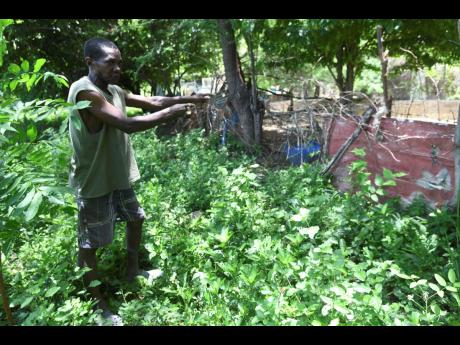 Farmer Winston Scott showing his goat pen which he said is now affected by water coming from the main road. 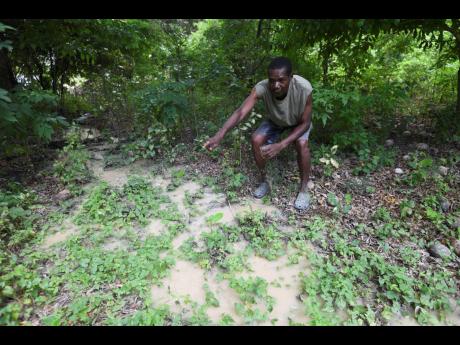 Scott said that although he enjoyed his time in the ‘pool’ that appeared on the roadway, he will not be able to farm for about a week.
1
2
3

St Thomas farmer Winston Scott said that after enjoying himself in a makeshift swimming pool last weekend in the community of Pamphret, his farm has been transformed into a lake as workmen emptied contents which led into his farm.

Sipping his liquor from a plastic cup, the farmer said he had to remove his livestock from their waterlogged pens which increases the risk of them being stolen.

"Is 14 goats mi have but mi have to tie out the four big ones way out in the bushes because mi nuh want dem tief dem. Mi can't put dem back in the pen until about a week time when di place dry. Mi praying that nuh rain nuh fall," he said.

Yesterday, workmen contracted to the Southern Coastal Highway Improvement Project (SCHIP) emptied the pool which was caused by a broken pipeline that formed a huge hole along the roadway. On the weekend, some residents used the hole as a community pool. Scott said he joined the festivities but did not know that his farm would suffer.

"While the pig dem will survive in any condition, the goat dem can't manage the wet place because it will make dem hoof split up and crack up. Goats are very tender and require lot of care. Dem don't like water so if yuh notice dem lick down di cane dem so dem can get dry spot. Any time rain fall or if the pipe should buss again, a whole heap a people a go get knock because the water a go cross the road and come in dem backyard or in we farm," Scott said.

He stressed that he has no other choice except to put down his cutlass for a week as he can do no farming. His biggest concern though is the safety of his animals.

"Da water here set me back a whole lot because di place muddy bad and it a run and pool up. Right now mi risk having people tief off di goat dem because di criminal dem terrible in a St Thomas. Mi have to stop mi likkle farming now because nothing can't plant in dis condition. Dis really rough on we right ya now," he said.