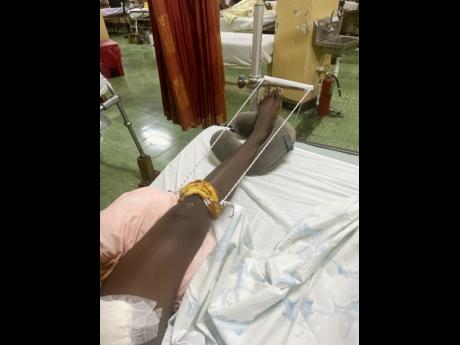 The teen who was allegedly shot by a member of the security forces is recovering in hospital.

Howard Johnson, whose 15-year-old son was shot and injured during an operation carried out by the security forces in Seaview Gardens last Wednesday, said he is worried that the ordeal will break the teen and cause him to harbour negative thoughts about the police.

The father of five, who lives in the Bronx, New York, told THE STAR yesterday that the incident has left deep psychological scars.

"My son shouldn't be in this position. I am so worried about the son weh mi a go have for the next 15 years. The trauma and everything that will come with this experience," said Johnson, while adding that his son was now recovering steadily.

"He did his surgery and is in recovery waiting to start therapy now. The doctors made him try walking on his foot today but mentally he is very traumatised. I am very worried about that," said the 41-year-old truck driver.

Johnson described his son, who is an aspiring footballer, as "attentive" and "helpful" but said he now fears that those values could be affected.

"That is my biggest concern, mi no know weh this a go do. Mi no know if it a go mek him be somebody who a go be rebellious now, mi no know if him a go have a resentment against police. Him already categorically said, 'Daddy, listen if me fi ever come back a Jamaica, it affi be wid yuh or mi never come back'," he said.

The shooting incident is being investigated by the Independent Commission of Investigations [INDECOM]. In a statement, the oversight body said that "the security forces report an engagement with at least one (possibly two males), one of whom is reported as allegedly pointing a firearm at the members of the security forces".

"It is reported that of the responding officers, no JDF [Jamaica Defence Force] officer fired their weapon but one JCF [Jamaica Constabulary Force] officer fired his weapon during the incident. The 15-year-old boy was conveyed to the hospital with a gunshot injury to his leg. No weapon was reported to INDECOM investigators as being recovered from the scene or the injured boy," the statement also read.

The injured teen's mother, Carla Simpson, claimed that the police told her that her son was with some friends involved in wrongdoing at the time when he was shot. She, however, strongly dismissed those claims.

"Mi son nuh live yah so, so how him affi a par wid gunman? Him no know nobody because him go weh from him a child. Who him fi know?" said Simpson.

Her sentiments were echoed by Johnson who also has accused the police of being lacklustre in their approach towards the investigation.

"Today [yesterday] is the first I am talking to them [the police] since my son got shot. No, we are not pleased with the police," he said.

Attempts by the THE STAR to get a comment from Senior Superintendent Kirk Ricketts, commanding officer of the St Andrew South Police Division, proved futile.