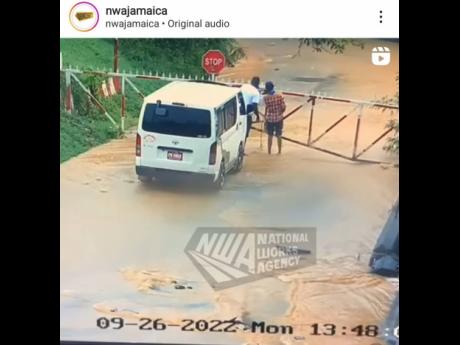 This screenshot of a video posted on the National Works Agency’s Instagram account, shows the two men trying to open the gates to the Bog Walk Gorge, even as the road is becoming inundated.

Assistant Commissioner of Police Gary McKenzie, who is head of the Public Safety and Traffic Enforcement Branch, said that the police are investigating the matter in which two men tried to break the locks of the floodgates that lead to the Bog Walk Gorge yesterday.

"It is clear malicious destruction of property and they are not supposed to do that, it is there for safety purposes so they shouldn't be breaching it either. We are trying to find them because we are wondering why they would be trying to do that," McKenzie quizzed. He further stated that under the Jamaica Constabulary Force Act, "police have the authority to close any road that is likely to be danger to the public."

"They could've ended drowned and died," Shaw told THE STAR yesterday. The men were caught on camera using a bus jack, which was taken from a vehicle in which they were travelling to try and break the lock and chains that secure the gates. While they were attempting to gain access to the gorge, water from the Rio Cobre flowed on to the roadway.

"It is quite illegal, very illegal activities, it is stupid and extremely dangerous," Shaw said, describing the actions of the men.

The floodgates were constructed at a cost of $100 million and were aimed at curtailing the loss of lives during heavy rains. The Bog Walk Gorge is frequently closed when the Rio Cobre overflows its banks.

"The gates were put up for safety of the persons to prevent persons from going in there when it is flooded," Shaw stated, adding that had the men breached the closed gates, they risked losing their lives as well as harming the passengers in the parked Coaster bus.

However, Monday's incident was not the first of its kind, said Shaw, noting that in the past, persons have removed the floodgates and gained access to the flooded gorge. But he said that it is the first time that offenders have been caught on camera.

"We have always had this problem," Shaw declared. Shaw is imploring residents not to attempt to gain access to the flooded gorge.

"There are going to be consequences and I do hope that the police will be able to deal with it," he said.