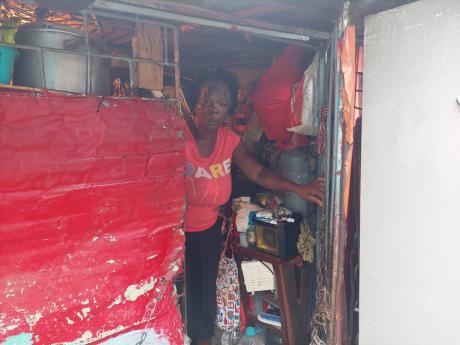 Victoria Gylard looks out from her dilapidated home. 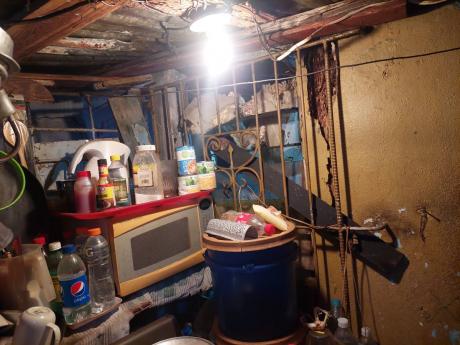 The tears streamed down the face of Victoria 'Claudette' Gylard as she peered through her dilapidated shack on Wildman Street, central Kingston, yesterday.

Her clothes were damp from bailing buckets of water from her bedroom. Heavy rains lashing the island for the past three days added to her mounting problems. The 63-year-old said that she is hungry and broken, and longs for better days.

"A mi alone and mi a tell yuh say the water a come and mi nah sleep because when di bath pan dem full, mi have to keep on a throw out water. Mi just take off the piece a wire off the roof because water a drop pon it and mi nuh want it cause nuh fire. Mi have to a throw out water and set back the pan dem again," she said.

An old refrigerator plays a vital role in holding up the roof of Gylard's shack, which she rents for $2,500 a month. The ceiling is at arm's reach, and there is hardly any space for her to move in her extremely small bedroom. There are no windows, only gaping holes from the walls and sheets of zinc.

"Is on the bed mi have to put one of the bath [pan] dem so mi can't lay down and sleep. The wall crack out and open wide, so in the room the water go. Mi have to sit up at the edge of the bed and lean mi head on the wall and draw one chair to stretch out mi foot on. God know mi tired a this, enuh," she said between tears.

Life has not always been this challenging for Gylard. She said she had a steady job but a few years ago she received serious burns to her legs from a cup soup, and was subsequently laid off.

"After that mi used to walk and pick up plastic bottles and sell but mi can't manage it because of mi foot. No window nuh in the house, a just some hole. Suh mi can't get good oxygen. Every minute mi have to go to the doctor. Is last week a di last mi go and the doctor say mi sinus on mi, pressure, depression and gastroenteritis because mi nah eat on time. Yuh know how much time mi guh a mi bed hungry?" she said.

As she spoke to the news team, dozens of cockroaches crawled through the crevices of her walls, just some of her unwelcomed house guests.

Those persons wishing to assist Victoria Gylard may contact her at 876-387-4612.