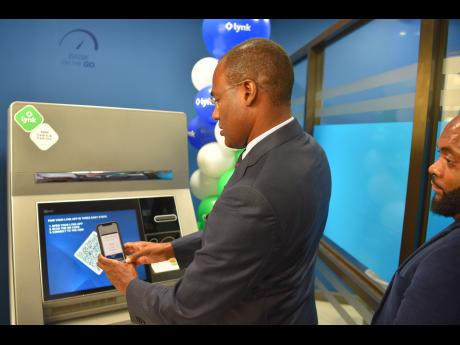 Against this background and following groundwork by the administrators of the digital wallet, Lynk, persons without bank accounts are among the individuals now able to conduct transactions at select automated banking machines (ABMs) using their cellphones.

This is being facilitated through the new Lynk ABM Cash in-Cash out feature.  Lynk is currently the sole approved wallet for Jamaica’s Central Bank Digital Currency (CBDC) – JAM-DEX.

JAM-DEX, which was developed by the Bank of Jamaica (BOJ) provides a safe, efficient, and convenient way to pay for goods and services. National Commercial Bank (NCB) offers JAM-DEX through Lynk.

Addressing the recent media launch of the cash in-cash out feature at the NCB Atrium in New Kingston, Lynk’s Chief Executive Officer (CEO), Vernon James, said it is envisioned that a significant number of persons will use the facility.

“In the test phase, we have seen over 1,300 transactions. We expect to see exponential use of this feature as users have 24/7 access to deposit or withdraw money whenever they need it,” he explained.

Since its launch in December 2021, Lynk has facilitated transactions valued over $5 million, with the platform hosting approximately 145,000 individual customers and nearly 3,000 merchants.

The new feature targets Jamaicans reported to be unbanked as well as those classified as underbanked, due to their limited use of the formal banking system.

“This free-to-use, contactless feature brings a new level of inclusiveness, as it gives anyone, even those without a bank account, the ability to transact digitally… and the process is simple and easy. All you have to do is visit the ABM, choose the cash in and the cash out [feature] of the Lynk wallet in the app, scan the ABM QR code using your Lynk app to connect to the ABM, and complete the transaction,” he said.

James said in addition to being fast, the process also affords security, noting that persons are not required to input an account number.

“There’s no need to swipe or insert a card… so no need to worry about card fraud. Plus, with Lynk’s world-class encryption software, users’ funds will be secured in the digital wallet,” he said.

Lynk has absorbed all the associated banking fees, making it completely free to use by wallet holders.

“Together we’re working towards a digital future for all, increasing digital literacy and offering access to financial solutions. We have stepped in front as the leader in the space, and this is just the beginning,” Mr James stated.

For his part, Minister of Finance and the Public Service,  Dr Nigel Clarke, said the new Lynk feature is expected to play a critical role in Jamaica’s transition to a fully digital society.

“The only way that we are going to be able to include the hundreds of thousands of Jamaicans who are a part of this economy, is to have technology that allows us to leapfrog some of the difficulties that the society has with the traditional methods,” he pointed out.

Dr Clarke said with the launch, efforts must now be channelled into ensuring that adequate physical infrastructure is in place to promote the ease of doing business.

“As we push Lynk and CBDC, especially the feature enabling cash in and cash out with ABMs, we have to ensure that [there are] ABMs all over. We can have the conversation, and there are ways in which the Government can play a role. But the idea is that we make financial services available throughout the length and breadth of Jamaica,” he said.

The Minister further noted that having more digital services will increase productivity.

“It means we can do more things with the same amount of time. Rather than stand up in a long line to go get your money or deposit your money, you just access it on your phone or through some other channel. So, because of the productivity gains of [going] digital, it becomes less costly operationally,” he stated.

Full CBDC implementation is expected to significantly reduce traditional challenges associated with many Jamaicans not having a bank account.