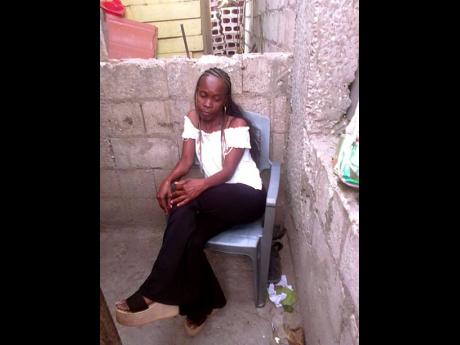 Even as she battles stage 2 breast cancer, Marva-Lee Fowler is encouraging other women who are battling the dreadful disease not to lose hope.

Reflecting on the two years since she was diagnosed, Fowler, a vendor said the disease has changed her life significantly, but she is optimistic.

"It's not a easy fight, but we just cannot give up. Pray and fight will all your might," she said. Approximately 17 years ago, Fowler discovered a lump in her right breast, but she said that doctors told her that she had nothing to worry about.

"I usually check my body all the time, because I was told that cancer a come from a great-great, old generation dem. So one day I felt a lump and went to the clinic, but they said it was because I had a baby and the milk clogged up. It went away for a while," she said.

Fowler said she continued to self-check and about two years ago, felt another lump under her arm. She said she immediately went to the Kingston Public Hospital (KPH), where a series of tests came back normal.

"One day mi feel like sumpn stick mi inna mi breast, and then mi feel a next lump inna mi breast. Mi say, 'No man, mi a go back to the doctor because see di lump come back at a different place deh.' Mi fren tell mi say she a go carry mi go [Jamaica] Cancer Society and I went and did a mammogram," she explained. Fowler said that while she waited on the results, she prayed earnestly that they would be positive.

"Mi sidung and start to cry and a say, 'God, I wonder if a generation curse dis mi a pick up. Mi have mi daughter to take care of and mi couldn't afford to go dead now, because her father dead,'" she said. Three months later, she was given an emergency referral to head to the KPH.

"When I went to the hospital, the doctor made me do a biopsy. When dem test, di doctor hug mi up and say, 'Yuh a go be mi baby fi a long, long time.' All type a things start run through my mind, and him say, 'Yuh have cancer.' Mi just tell myself say mi a go live, I wasn't angry," she said.

October is celebrated as Breast Cancer Awareness Month worldwide. The Ministry of Health and Wellness said cancer of the breast is the most common cancer among Jamaican women. There were 1,208 new cases of breast cancer in Jamaica in 2020.

Fowler told THE STAR that since her 2020 diagnosis, she has managed to complete six of the eight cycles of chemotherapy, but funding is now an issue.

"I was supposed to do one last month, but I didn't go back for it because they offer it free. But I can't afford the medication that I am supposed to get before the session. One of the injections is for $20,000, and that injection is used to bring back the white blood cells. I also have a bone test to do and that is $32,000, and that test is very important," she said.

She said although the side effects from the chemotherapy can be debilitating, she cannot afford to take a break from her vending job.

"I have to go out and do it, because my daughter is 16 and is doing CXC next year. Mi have to go out because there is no help. Sometimes after the sessions, mi will feel very weak, and mi will vomit and just feel really bad. But mi still have to go out there and work. Sometimes I don't have the pills to take after the chemo, so it make mi feel extra bad, but mi nah give up. I will beat this," she said.