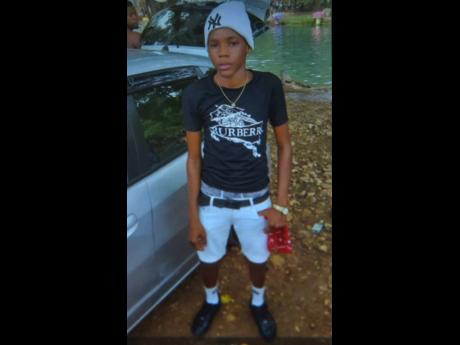 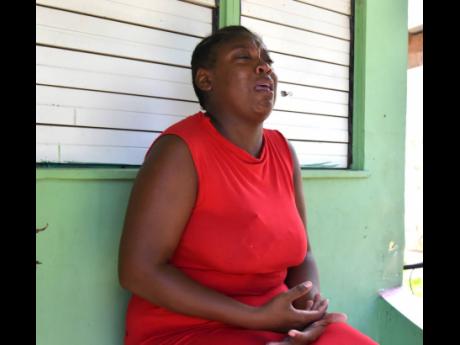 Aliyha Edwards is overcome with grief as she remembers her brother Tyrone McDonald, who died from gunshot wounds he received during an alleged shoot-out with police.
1
2

Just hours before 18-year-old Tyrone 'TJ' McDonald took his last breath at the Spanish Town Hospital on October 5, his older sister Aliyha Edwards said he beseeched her to get justice for him.

The teenager was shot on September 18 in Gulf, Gregory Park, St Catherine, in an alleged shoot-out with the police. Yesterday, a tearful Edwards joined relatives in building benches and tables for Tyrone's nine night which is scheduled for this Friday in Compound, a short distance away from where he was shot. She stated that making funeral arrangements for her 'baby brother' was the last thing the family had expected.

"Last week Wednesday when mi go look fi him, him keep on a tell mi say him love mi. Him tell mi say him want to see him babymother. Him girlfriend pregnant suh him nah go know him baby. When mi a leave him say 'Please get justice fi mi. Mi nuh feel mi a go make it. Mi can't fight no more'," Edwards said. That was 8 a.m.

"Him girlfriend go look for him after 12 and mi talk to him on mi phone and him tell mi say even if him nuh move, mi must still fight for justice for him. Mi tell him say mi love him and him tell mi back and that was it," Edwards said between tears.

The police reported that law enforcers were on patrol when they were allegedly fired on by two men, who ran on to the premises. The police said they gave chase and returned the fire, hitting one of the men. Angry residents reportedly attacked the lawmen and tried to prevent them from apprehending the men. The cops then called for reinforcements. But residents told THE STAR that they did not attack the police. They said they barged into the yard where the injured teen was laying and demanded that he be transported to the hospital. Edwards is adamant that Tyrone was not a violence producer and wanted to become a businessman. She questioned how he was shot at close range despite if it was a shoot-out, and how no gun was recovered from the scene. Lawmen with whom THE STAR spoke to at the scene confirmed that no firearm had been recovered.

Edwards also questioned how Tyrone, a former Ascot High School student, was never charged with any crime while he was in hospital under police guard.

"I was really angry and I remember at one point at the hospital me and one of the police officers catch up and TJ turn to me and say 'Mi sista, yuh know yuh can't bad up the police, dat wrong'. Him tell mi say everybody do make mistake. He didn't have anything against the police force," she said.

Edwards showed the news team videos of Tyrone in the hospital speaking to relatives, but said his condition took a turn for the worst last week.

"We did a try move him to UHWI (University Hospital of the West Indies) but the doctor say him can't move because they need to get him some blood and get him more stable first," Edwards said. She said the family was contacted by the Independent Commission of Investigations but is yet to hear from the police.

"Mi nah go rest and if it take mi last breath fi breathe, mi a go get justice fi mi bredda because at the end of the day, a it him ask for," Edwards said.

THE STAR reached out to Superintendent Hopeton Nicholson, head of the St Catherine South Police Division, but he said he would have to make further checks as the incident took place while he was on vacation leave.