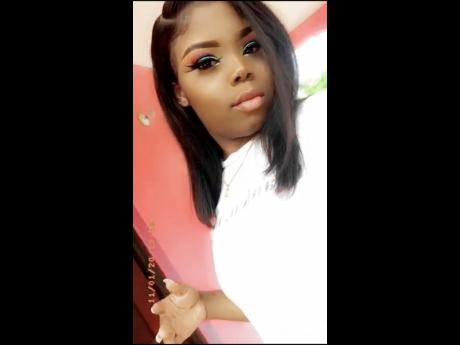 Domonique 'Dom Dom' Donaldson was just 19 years old, but she was a devoted mother to her 10-month-old daughter, and was looking forward to seeing her unborn child.

She had plans of becoming a teacher and as such, worked as a customer service agent throughout her pregnancy with hopes of funding her tertiary education.

Unfortunately, the teenager will never realise her dreams as she was killed in a hail of bullets on Sunday morning along Maiden Street in East Kingston. Her babyfather and infant were also injured in the attack.

"She died protecting her daughter," said a relative, who surmised that more than two dozens shots were fired in the dwelling which was occupied by the teenager, her 25-year-old boyfriend and her 10-month-old child.

"When the shots were being fired, she lay on the baby, so is the shots [that] went through her shot the baby. All she was trying to do was cover her baby," the relative said.

Reports from the Elletson Road police are that at 2:35 a.m., Donaldson and her family were at home when gunmen kicked open their door and opened fire, hitting all three persons. They were taken to the hospital where Donaldson was pronounced dead, and her child and her spouse were admitted. The baby reportedly sustained gunshot wounds to her leg.

The relative said Donaldson, who was in her third trimester of pregnancy, had relocated from St James to the community a little over a year ago. She was described as quiet and ambitious by those who knew her.

"She was a very intelligent girl and she wanted to become a primary-level teacher. She got pregnant, but she still do her work at a call centre as she wanted to secure a career and a future for her children," Donaldson's mother, Cotishea Godfrey, told THE STAR.

Another family member said that the teenager was extremely committed to her infant.

"She was very protective of her daughter, so she wouldn't leave her with anyone. Even when she working from home, she have the baby with her. She was young, but she was a very fit mother," the relative said.