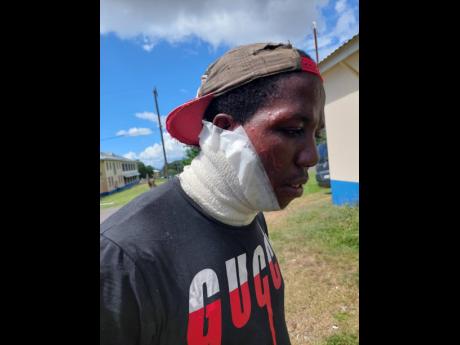 Junior Linval Reid shows the burns he received to his face and neck. 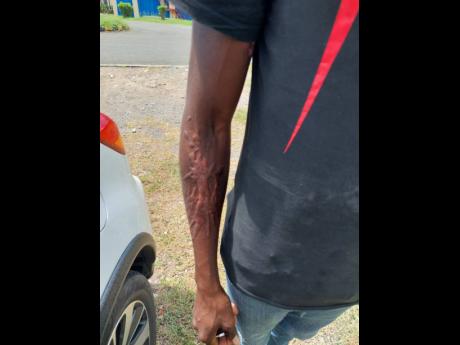 Reid shows his burns from the acid attack.
1
2

A St Mary man who attempted to buy sex for the first time, said he was burnt and robbed by a woman claiming to be a sex worker.

Sporting a huge bandage around his ears and neck, Junior Linval Reid, 27, implored other men to be careful so as to avoid a similar or worse fate.

"It is not safe. Is walk mi a walk go about mi business and one of them throw corrosive substance on mi. Some people say if a did dem, dem would a rather dead, because dem nah make dem money go suh. Every timemi look in the mirror on mi skin, it give me an emotional sad feeling," he said.

Reid said that on July 10, after leaving an event at Emancipation Park in New Kingston, he was approached by a woman.

"Mi never buy sex yet, so di 'catty' ask mi if mi a do business, and mi ask har how much a di price and she tell mi say $2,000. Mi have $8,000 in mi pocket into a bag, suh mi guh into mi pocket and take out the bag fi go pay har and she grab the bag. When she grab the bag, mi try take it back from har, and mi just see when she raise har hand and mi body start burn mi like fire," he said.

He told THE WEEKEND STAR that as the corrosive substance pierced his skin, he ran in the direction of the New Kingston Police Post. It was there that he was assisted to the Kingston Public Hospital where he was treated for severe burns. Up to press time, the news team did not see a copy of the report Reid filed.

Reid said that he is in constant pain and was laid off from his job at a hardware in Kingston.

"Mi nuh have nutten a do now. This slow mi up. Mi feel like the upper part a mi body a bite mi sometimes. It mash mi up. Mi suppose to do plastic surgery and skin grafting on mi neck. Mi would want to get back mi skin to look as normal as possible because mi nuh like see it suh," he said.

"Right now mi can't work, suh if anyone could help mi out with little eatings and food kind, mi would appreciate it. Mi nuh wah beg, enuh, but mi can't manage to take care of myself the way I would want to," Reid added.